Born in Memory by Reem Aljeally 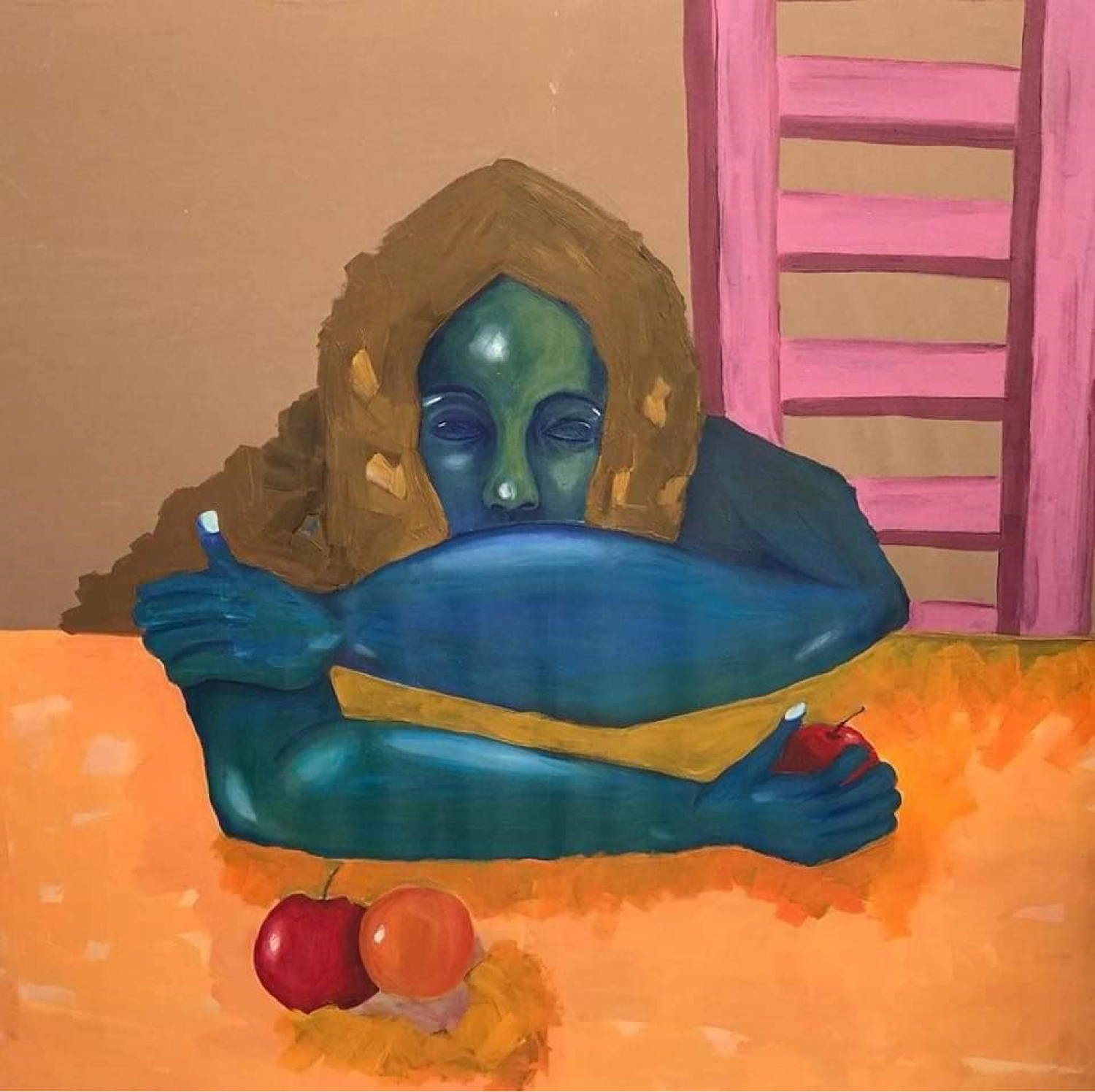 Who is Reem Aljeally?

Reem Saif-Aldin Aljeally, graduated from the University of Khartoum, faculty of Architecture in 2018. She had always sensed that her wish is to practice art and become an artist one day, yet despite small attempts at a young age, Reem believes that she did not take the craft seriously until recently.

First appearance on the artistic scene

In 2016 Reem participated in a local competition organized for young talent. Back then,Reem was still a novice, and she participated with one painting to display. To her surprise, that single painting was received with suchfervor, it gave her the motivation to work on her natural talent and become the expressive artist that she is today.

‘I spent a lot of time working on my skills trying to find my style, as many artists struggle to find their own’ said Reem. One year later, after extensive work and skill improvement, Reem managed to organize her first exhibition titled Lumis, which was joyously themed after her favourite fictional character- the young but intelligent wizard,Harry Potter. Laughing at the memory Reem recalls “I remember I was very anxious when I organized my first exhibition in 2017, I asked my friends what if no one comes, then we will look at the paintings alone.”

At the time, Reem was in her fourth year at university, swamped with classwork and assignments. However, she found it suitably challenging for her to organize the exhibition and find time for studying at the same time. The main idea behind the exhibition was not to only to show her artistic talents, but to have fun and give breathing room for some of thoughts bottled within by having them expressed on canvas using pencils. Eventually, she managed to give the viewers wonderful artworks. 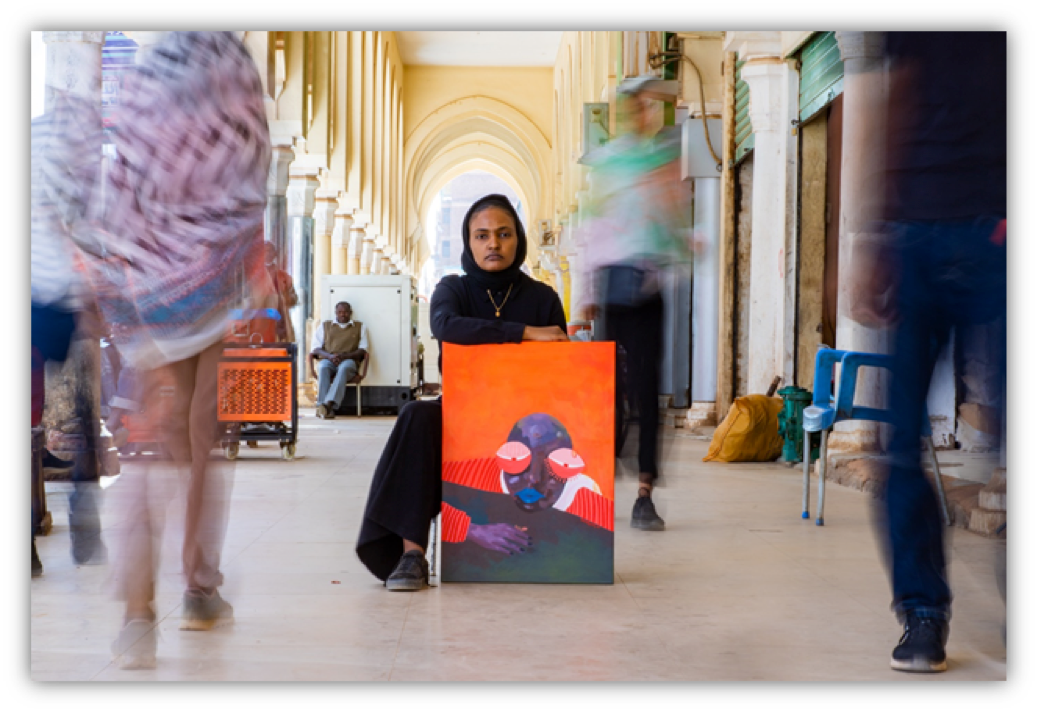 The first exhibition showed the public what a talented person Reem Aljeally truly is, but that was not enough for her, and she set on a path to keep working on herself, continuously learning and improving her skills, adding new tools to her roster by shifting from pencils to brushes, and trying her hand in oil painting and acrylic. In Reem’s eyes, practicing a craft is a non-stop process if one wishes to get better. Fully invested, Reem enrolled for drawing classes at the Khartoum Centre for Art in 2019, her aim was to learn from a professional and gain another perspective on artistic expression.

‘It will always be one of the dearest times for me, the period that I had spent at the Khartoum Centre for Art and the things I was taught there changed the way I look at and practice art completely’ stressed a grateful Reem after learning much from her teacher then Hatim Koku. Afterwards, Reem started preparing for her second showcase.

During college years, and despite the huge amounts of tasks she had to do, Reem was always able to find inspiration within almost everything her eyes fell on. She reflects ‘artists look at things differently, feel things differently and connect images together differently in order to come up with a new concept or a point, or project a certain emotion in a particular way’. She continued ‘art is an expression so every painting I did represents a certain feeling for me, or an idea that I wanted to express. Artists are often asked about how they feel when they paint, and I think every artist can answer that question with a different response’.

Talk about the Muse 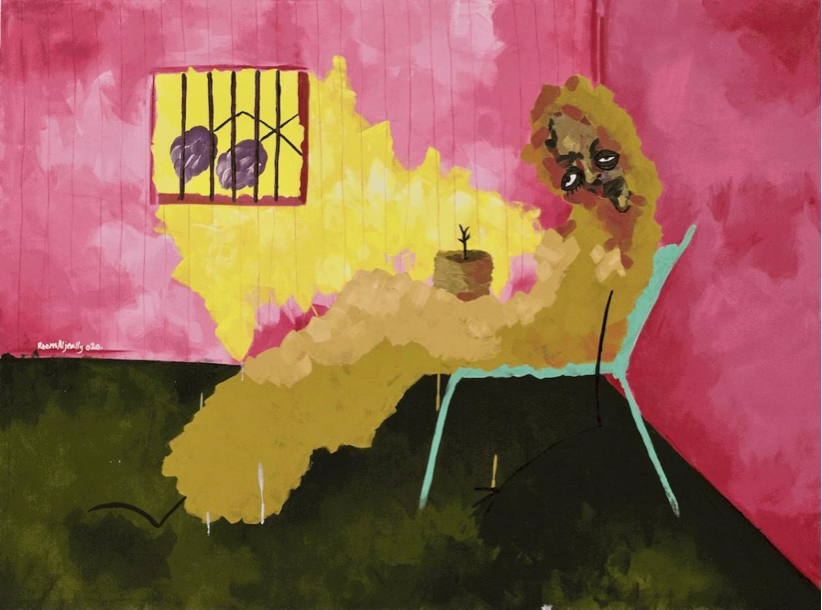 Support for Reem Aljeally is an important issue; she strives to help emerging artists in paving their path the same way she did during her days as a raw talent. This is why she established The Muse Multi-Studios, a platform for amateur and aspiring artists to learn, practice, and showcase their artwork. The idea came to Reem in 2018 after encountering the creators behind Sol for Change. Reem and the team behind Sol for Change started working together on projects and exhibitions, collaborating to produce quality content and support artists development.

Currently, Reem is working on turning the Muse from a virtual space into an actual art hub, aiming to offer young talents training courses and residency programs ending with showcases. The plan is set to develop artists by building their confidence, raising awareness surrounding art, and attracting public attention to the artistic community. 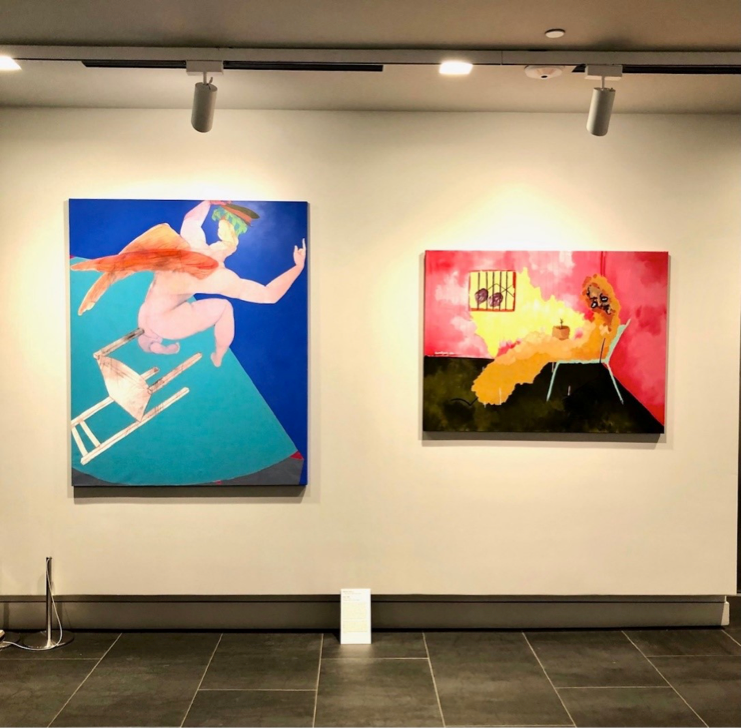 Reem explained the concept of her latest exhibition titled Born in Memory noting ‘every artwork you will see in this exhibition has its own story, represents its own emotion, and portrays its own thought’. A general viewer may look at the displayed artworks and think they all look the same, but a keen observer would certainly see the differences. ‘All of these artworks are within spaces, and I took that idea based on architecture and what I studied’ said Reem, and agreeably, the eye catching drawings stand out.

When asked about how long it took to come up with the idea for Born in Memory, Reem replied saying ‘it took me all of 2020 to prepare for this exhibition. Unlike many, 2020 was a good year for me, and I think I came up with something good’. The artist continued ‘Born in Memory in essence represents the idea that everything we see around us is imprinted in our minds, a new memory is stored, even in our average daily activities art can be found’.

The one year long period it took to prepare for this exhibition was justified when Reem explained the number of things she had to get done in order to bring this exhibition to life. She narrated ‘it was not easy, yes I had Sol for Change beside me helping me along the way, but many details needed to be sorted. Thankfully everything came through and we are here now’.

Fruits of the Experience

After five years as a practicing artist, Reem Aljeally strives only to become better at what she does, projecting her thoughts and emotions on canvas. On this note, Reem said ‘there is a little part of you in every art piece you create, and I did that exactly with these paintings. I spent the entire year preparing for this, so you can imagine the time I invested in each of my paintings’. Agreeing to this Abdulrahiem Shaddad from Sol for Change, the artistic initiative that curated the exhibition, said ‘Reem is one of very few artists who succeed immensely at summoning the creativity from within. In each artwork you see, there is a sense that this piece speaks directly to you. I think the entire art community has a lot to learn from her’.

Born in Memory is the third art exhibition by Reem Aljeally and it was curated by Sol for Change at Savannah Labs in Khartoum. 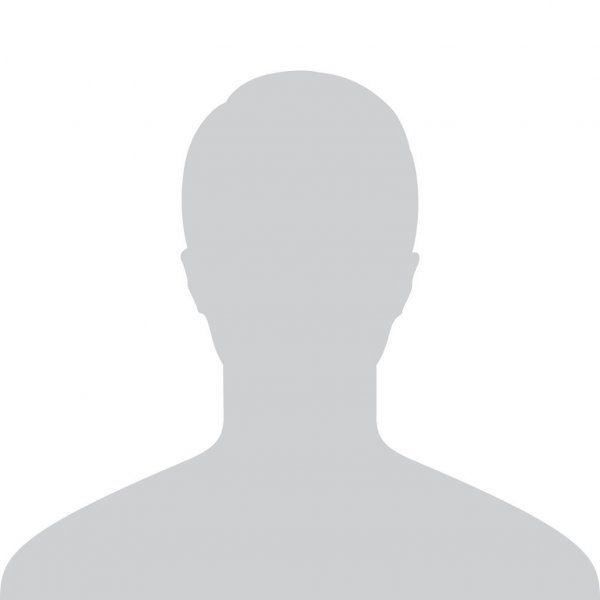 Nickname Tony, last name Malik. A novice writer who likes to engage in mindful discussions, and a keen observant of the artistic scene.