South Sudanese Refugees & Corona: Practicality of the Guidelines and Directives

Ever since Uganda confirmed its first case of the novel Coronavirus on the 19th of March 2020, the ministry of health and President Yoweri Kaguta Museveni have issued a series of guidelines and directives. President Museveni addressed the nation at least six times in the first two weeks, in a bid to combat the virus from spreading throughout the country. But, how practical are the guidelines? do people have an understanding of the guidelines? are they in acceptance of the guidelines and directives? I put these questions to South Sudanese refugees in Uganda and Ugandans in the Northern Town of Gulu.

How practical are the guidelines and directives to refugees?

Hadia Hassan, a refugee at Boroli refugee settlement camp in Adjumani district says there’s limited information regarding the Coronavirus given to them as refugees. Hadia added “some of us are not getting enough information in relation to the Coronavirus. Some of the information we often get on social media is scrappy, but also difficult to breakdown especially with the terminologies used”. Ater Garang, another refugee from Maaji refugee settlement camp says through a translator “most of the health workers use English when they are doing their outreach, worst of all is with the corona virus pandemic.” Emmanuel Sebit, also from Maaji refugee camp, says the anxiety is high among the refugees especially after a case was reported in Adjumai district. He says his family has now intensified hand washing and distancing themselves from the public. Adding “however much we can, we try to distance ourselves from the public, which is only compromised by the food distribution days”. Patrick Drifua a refugee from Agojo refugee settlement camp in Adjumani district says it’s quite tricky to understand some of the guidelines and directives citing the self-quarantine in a refugee camp. He adds “first of all in various African cultures, when one is sick, you must visit as a friend or a relative but with the directive, it gets even more tricky. The space allocated for each household in the refugee settlement camp is 30 by 30 meters, and in most cases, each household has between 5 to 6 family members living on the piece of land, then how can one self-quarantine in such a small space?” 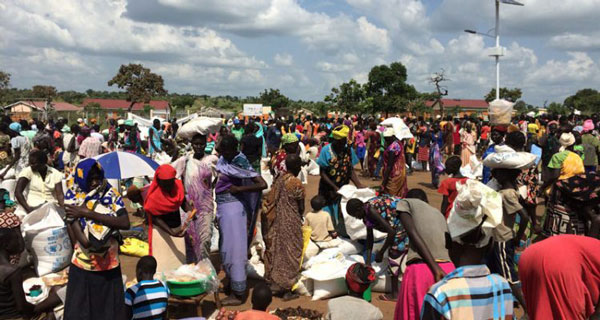 Refugees in a Ugandan camp via independent.co.ug

Do people have an understanding and acceptance of the directives and guidelines in both the refugee camps and within the locals’ settlement?

Hadia says she has minimal understanding of the guidelines and directives due to language barriers, because most of the health workers in the district use English. Hadia said “some of us see and do what our colleagues are doing, like the hand washing facilities”. Drifua is worried, especially during food distribution mingling. Jolly Komakech a resident of Lacor trading center in Gulu district says most people have understood the guidelines and directives but in a typical rural home setting where people share houses, the self-quarantine is a mystery. Jane Aber a resident of Layibi central sub ward in Gulu municipality says: much as she has understanding of some of the guidelines and directives, the issue of distancing especially in the market is also tricky with the number of people who are flocking as they rush to buy food items. “When you are in the markets now, people are mingling as they struggle to buy food items- especially with the current curfew imposed from 7 PM to 6 AM, which affected many people who tend to buy their stuff late in the evening as they return home” she expressed.

George Bhoka, Adjumani district health officer says they are faced with challenges of illegal entry of South Sudanese refugees in Uganda. He says, on a daily basis they receive an average of 30 to 34 refugees illegally entering Uganda since the border has been closed to travelers as part of the COVID19 measures. He added that most people enter the country to get food rations, adding “those who enter the country are not tested, yet they mingle with their colleagues in the district and host communities compromising public health as well as defying presidential directive on closure of the country`s borders”. 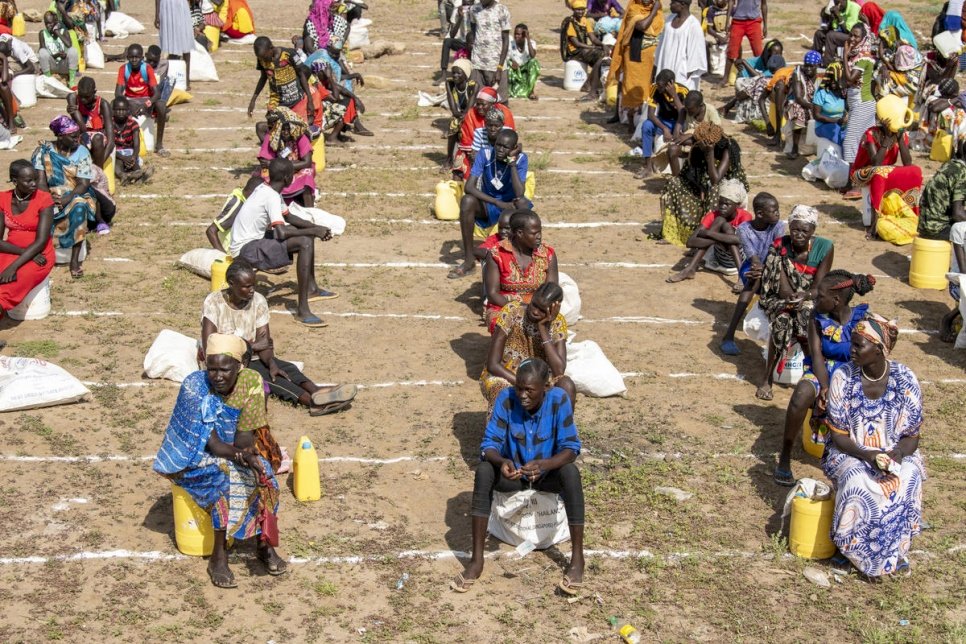 Photo taken at Kakuma camp in Kenya by Samuel Otieno for UNHCR via unhcr.org

Bhoka also says, they are trying to minimize language barrier issues through translating the guidelines and directives in the various local languages for both Ugandans and refugees in the country. He noted “we have set up a translation committee in all the settlement camps to help us translate to the various refugee communities in the languages they can best and easily understand”. Adding “we so far have 260 people in the translation committees”. In a bid to ease the understanding of the guidelines, the district task force has set up a surveillance team that moves in the communities sensitizing both refugees and host communities on the guidelines and directives. “The team is comprised of village health team members, refugee welfare committee members and translators who move in the communities to also monitor and report to the district task force if one shows signs and symptoms so he/she is isolated” he added.

Julius Mucunguzi the public relations officer at the office of the prime minister says the government is in the process of translating all the information about the virus in all the local languages spoken among the refugee communities in the country. He says they have also reduced the number of food distribution points from 75 to 50 points. Hillary Onek the Minister of Relief, Disaster and Refugees in the office of the prime minister has written to all the refugee agencies and resident district commissioners in refugee hosting districts tasking all refugee desk officers and settlement commandants to ensure that transit and reception centers and settlements are decongested, minimized or vacated immediately. “The United Nations High Commission for Refugees and the Office of the Prime Minister are working with all refugee welfare council chairpersons to ensure that all homestead and zones have hand washing points and to sensitize the refugees on the preventive measure such as no hand shaking and use of sanitizers” Hillary concluded.

According to figures from UNHCR, Adjumani district hosts 203,791 refugees from South Sudan living in 34,782 households.