On South Sudanese Culture, Not War

With a massive love for cinema and fascination to follow and watch the latest films, I (and probably many like me) still have a personal list of movies-to-watch. Due to preoccupations and interests, you need to have such a list. “The Good Lie” is a film I knew about on the issues of South Sudan, but it was not even on my to-watch list. Nevertheless, it was there on my computer for two years and I finally saw it a while ago.

I – a casual viewer – can hardly ignore the conditional Sudanese presentation in Hollywood, and I do not think we should expect more. This is what I tell myself whenever the media brings up an issue that relates to Sudan in the cinemas or international or regional drama scenes. I kept losing my enthusiasm to follow the repercussions of the Sudanese presence - and South Sudanese eventually – across global cinemas. By the time news and official trailers of this film were released by the end of 2014, I resorted to my decision of not watching it, which had been something I’ve done for years.

The film - according to the official trailer – is a drama about The Lost Boys (or children), migrating away from war and horrors. Many elements were assembled by the advertisers to intensify and serve the meanings behind the main theme of the film’s story. Phrases such as "lost children of Sudan", "across three countries" and "war orphans" dominated. In addition to scenes of war, their joy as their names appeared on the emigration list, as well as focusing on the scenes of the film's heroine - Reese Witherspoon- the caretaker and godmother of the group of children (later becoming youth). Adding to that, there were scenes of displaced people and victims of war in South Sudan. All of these scenes in the film's trailer have – for me at least - been conceived naively as a way to preach -a bygone method of an era I have always thought Hollywood and film production have left behind. Fortunately, I was not entirely wrong. After watching the film, unlike the trailer, it was not as naïve as I thought it would be. 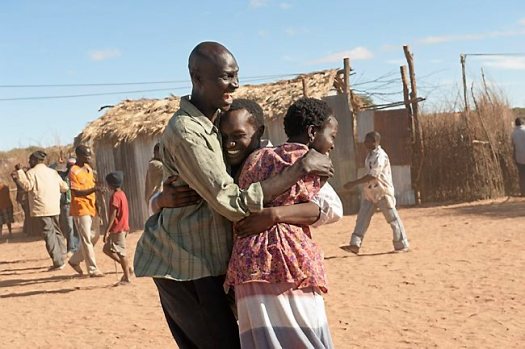 Cultural Presence and the Marginal Hero

The story begins with the tracing of four displaced children in 2001. We see scenes from the scourge of war in the Southern region of the pre-secession Sudan; the displacement that happens across three countries and life in refugee camps in Kenya while refugees waited for their US asylum applications to be accepted. The period that precedes traveling to America was what the trailer focused on as the main subject of the film. However, the director touched this part lightly, in a relatively shorter time compared to the overall time of the film – and by this, creating the first contradiction between the film and its trailer. The rest of the film revolves around their stay in the United States, making the story more fitting to the genre of films that explores immigrant communities and their issues in the American society. The film does not dive deep at any stage (dramatically) and does not sufficiently humanize the subject of war in a way that can gain our sympathy and sell the idea. We anticipate the potential difficulties that might face the characters along their escape and survival of the journey, and then experiencing the suffering of refugees, and the years taken for their asylum application to be accepted. Nevertheless, this all ends in the first quarter of the film. After which, the plane took off and landed in an American territory. The trailer ends here, yet the film just starts.

By staying together, we Found Hope

With this title, I think it would have been possible to build a more relevant trailer for the story and a scenario behind the film. The journey of survival and crossing the horrors of the war lasts 25 minutes at the beginning of the film, from a total duration of one hour and fifty minutes. The remaining scenes tap into the idea of ​​brotherhood as a central virtue in the societal structuring of South Sudanese culture. I think the idea was not pursued by the filmmakers as a critical value to contextualize the film, but it was rather presented more as a deep acknowledgment for the cultural heritage among communities, and its ability to shape the conscience and relations among people.

The loss of the mother, the father, and the traditional family bond as a result of the war, is immediately followed by the formation of a new family unit amid all this loss. This is coherent through brotherhood; it is indeed how the film begins and perpetuates occasionally. The group of brothers and children announced a new father (the eldest brother, naturally) when they lost theirs. This act actually shed light on South Sudanese values in how they define a family unit as a survival mechanism, and a model of the social bond. In a scene, the character of Jeremiah’s says as they stood on the grave of their friend: "by staying together, we found hope."

With its attempt of building a war theme for the film, the trailer leads us to an emotional readiness that is not relevant to what the film is about. War as a theater or a social space could be replaced by any other social construct without affecting the idea of ​​the film. This readiness affects how the film is received and absorbed. While we anticipate donor help and a journey of being understood and accepted in a new society, the film diverts us towards a cultural debate between two social components that are subjectively dissimilar. The scenario continues to serve the concept of brotherhood (from a cultural perspective) and reintroduces it as a response or the main drive of the story. The first problem the characters face, or the first cultural crossroad, is when they arrive at Kennedy Airport and discover that the only girl among them, Abital, will live separately in a different city away from them. The immigration officer tells them that the laws say females can only live in a family home. With the collision of the American definition of the family and the opposing concept the characters carry, their suffering is escalated by this separation. Carrie -Reese Witherspoon- realizes the importance of this bond, and she seeks to retrieve the sister, whom she then manages to bring back to her brothers. 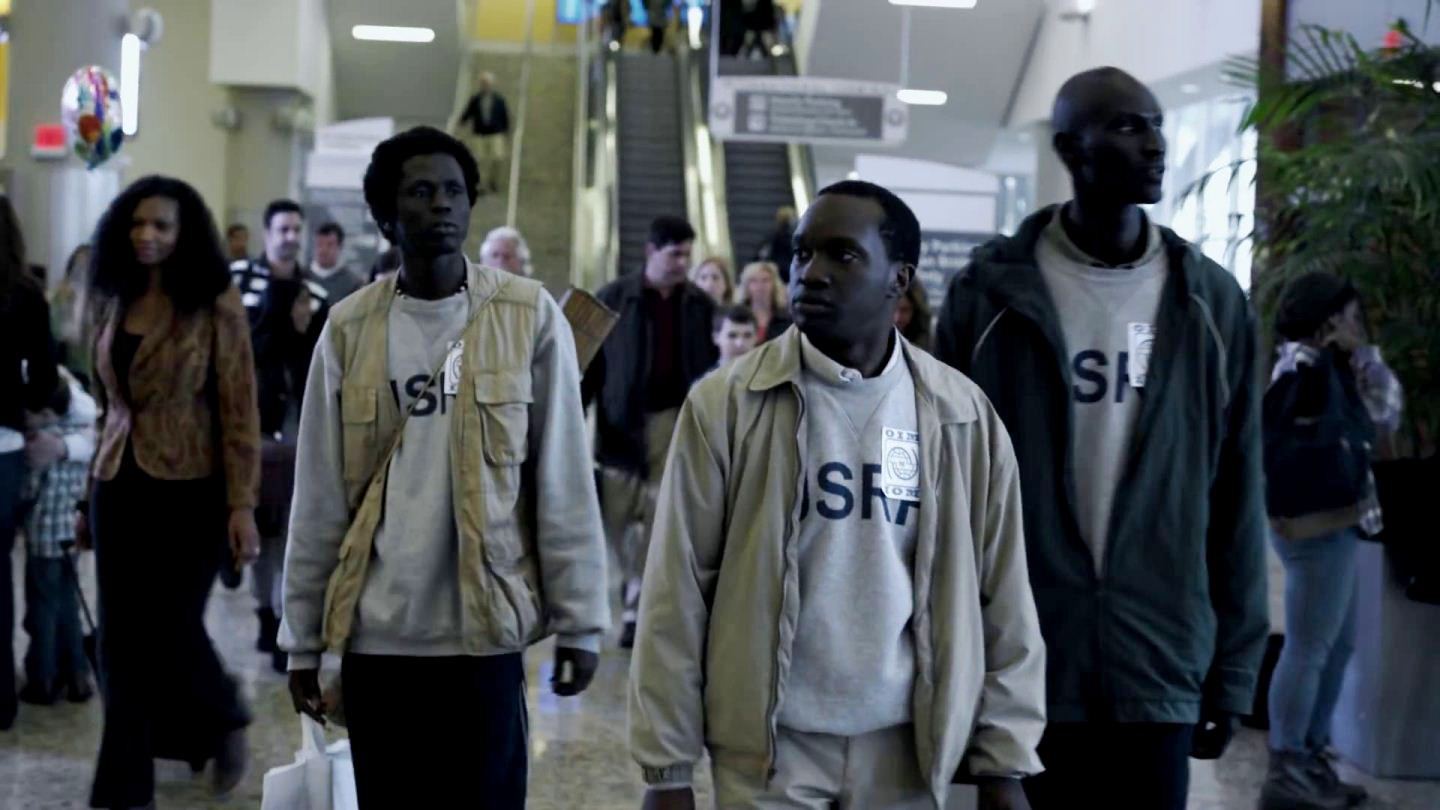 To emphasize the power and centrality of this value in the culture of South Sudan, the film does not point to other kinds of suffering and pain, such as: the psychological effects of war, homelessness, orphanhood, hunger and asylum, unless they integrate with the idea of brotherhood. As if the film is trying to tell us that all can be healed with the help of brotherhood. The separation of the brothers' family, and Abital's parting have cracked their sense of safety as a group and as individuals. This incident contributes to the remembrance of the incident of when they lost their older brother (Theo). The crisis of the narrator appears; Mamere, who is believed to sacrifice his brother for his own benefit, was revealed as the reason for his discovery and capturing. The pain was renewed after Paul described him as a selfish coward, saying “now you are abandoning Abital as you did Theo”. To make up for this sin, Mamere decides to return to Kenya. After finding the missing brother, he persuades him to travel to the US using Mamere’s passport, which is a huge lie and is illegal of course, but - according to the culture of South Sudan – it is for the sake of brotherhood, thus it is a good lie.

The features of equality and cultural debate are implicit in the dialogue of the film. The concept of ​​brotherhood is discussed from a cultural perspective rather than a humane perspective; as in not from the perspective of children of war or displaced people. For example, in the dialogue between the young Jeremiah and the film protagonist Witherspoon, he describes her –praising - as a white cow.

"It's an accomplishment to live alone," Mamere told her in another scene. In another scene, Jeremiah says, "I miss Sudan, at least we know there how lions looks like" (meaning the enemy or direct hostility). The film emphasizes using Jeremiah as a voice for expressing the importance of cultural presence. There are many scenes of cultural conflict that contribute not only to the classification of the type of film, but also to the formation of the South Sudanese and Sudanese culture and presenting them as people who can overcome the pain and displacement and develop opinions on everything, starting from human relations, and going through laws, work, love and life.