In the years of the aftermath of the secession of South Sudan in 2011, many were still wondering how to reconcile some of their thoughts and emotions during the historical socio-political shift. The creative arts was always at the forefront of articulate expression, and this book does just that by presenting the moment from the eyes of several writers. I Know Two Sudans is a compilation of short stories, poems and articles about Sudan and South Sudan collected through an online competition and printed for distribution in 2014. Andariya had the opportunity to speak to editors Amal Osman and Rod Usher about the book; it’s process, editorial team, pieces picked and the messages transcending through the pieces.

Andariya: What inspired the compilation of I Know Two Sudans?

Rod: Djamela Magid wanted to reflect her love of Sudan, even though she had spent most of her life in Britain. She spoke to me, and I was very enthusiastic, and recruited both Amal Osman and Dr Ali (treasurer). This quartet of ours worked very hard to make it a reality.

Amal: The original idea for a book of Sudanese literature came from Djamela after she had read Chimamanda Ngozi Adichie’s collection of short stories The Thing Around Your Neck and realized the absence of literature of a similar nature about the Sudans. From there, as Rod explained, she approached him with the idea and soon enough, we became a collective.

Andariya: Was the competition idea useful or did you resort to other means to collect the stories?

Rod: A very good website attracted a huge response – so a competition was agreed, with prizes donated. From the start there was enthusiasm to have creative writing accepted for the proposed book.

Andariya: The competition (and the book) did not focus on one genre but allowed for short stories, poetry and blogs, and both fiction and non-fiction. Why this wide range and how did this affect choosing winning pieces?

Rod: It was decided very early to accept a wide range of writing; the intention was to publish everything we received! That had to be modified, but the great majority of submissions were accepted into the final book.

Amal: We also wanted to allow for a diversity of creative expression, and give the writers the freedom to tell the narratives they want to tell through the medium they are most comfortable with/find the most suitable. This was a project promoting the arts in Sudan and among Sudanese diasporic communities, and it was important for us not to limit the forms of expression they may want to inhabit.

Andariya: How many pieces were submitted; what were approvals and rejections based on?

Rod: 42 pieces were published; a further 6/7 submitted but not published as they were either political or religious (from the start it was announced these areas would not be covered).

Amal: We had always agreed that we did not want any writing that had a political or religious agenda, and the 6/7 pieces that were not included were omitted only for this reason. It was unfortunate but necessary for the progress and the future success of the book.

Andariya:How was the book promoted? What was the feedback received?

Rod: The website announced the book; an exciting launch with readings was held in East London and other presentations (also with readings) were held in London and in Khartoum. The feedback was enthusiastic and dramatic: that continues 18 months later.

Amal: Djamela, Ali and myself also promoted it through our personal social medias networks, Facebook etc. We also reached out to young Sudanese organizations such as Youth Factor UK, and they also promoted the competition and the book on their website.

Andariya: Did you face any difficulties with publishing and/or distribution?

Rod: Gipping Press was helpful at every stage of the publishing process. Distribution is a constant problem, particularly sending copies abroad. Apart from public presentations many copies have been posted. As yet we do not have a distributor. As the Anthology is not likely to date it would be an important idea to search for a distributor who represents the thinking behind the project.

Andariya: Why did you choose Leila Aboulela as your judge for the competition?

Rod: Leila is a greatly respected Sudanese writer who embraced our project and became the judge of the competition. She encouraged us at each stage of the project.

Amal: To add to that, Leila Aboulela is one of the most successful modern Sudanese writers, and is respected more widely as an African writer. I was volunteering at a festival called Africa Writes that occurs every year, run by the Royal African Society.  Days before the festival, I knew Leila Aboulela was going to be speaking on a panel so I mentioned this to Djamela, and we saw a great opportunity to invite her to participate in the project as a judge and contributor. Not to sound cheesy, but it felt destined that she would be on a panel for that year’s festival just as we were in the midst of the project.

Andariya: Can you tell us about the selected charities the proceeds from this book go to and why you chose them?

Rod: The charities we selected were in favour of orphaned children in both Khartoum and Juba. Both charities need regular funding. With the cultural history of both countries this sort of need is fairly recent: families either no longer exist to look after the children or conflict has deprived the children of their parents. Recent donations have additionally been made to a Women’s Refuge in Khartoum. 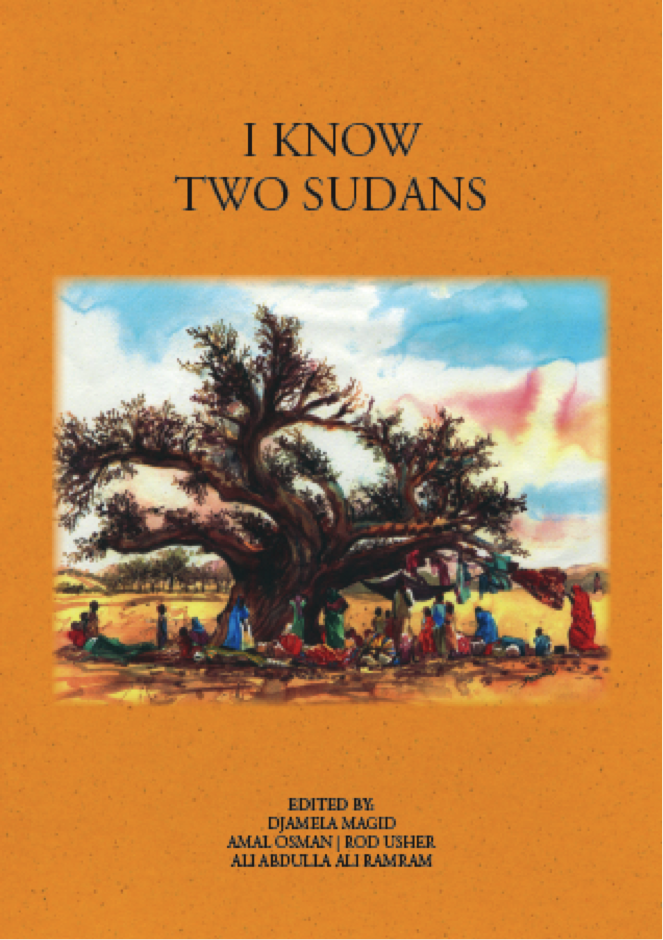 Andariya: What brought the team together to create this book – what are their personal bonds to Sudan?

Rod: Djamela, Amal and Ali were all taught by me at the Sudanese Supplementary School in London. In the years since they moved on through the education system they have kept in touch, and I’m an enthusiastic letter writer! All four try and keep abreast developments in the two Sudans. I also worked at Khor Taggat School from 1963-65 and maintained links with former students.

Amal: I am a literature student, so my passion is literature – be that reading it or writing it! Growing up in England, people never really knew of Sudan even though it was the biggest country in Africa at the time! I noticed the lack of knowledge people had of the country and the culture, and have always had the intention to be involved somehow in the recording of stories of the land and its people. This project embodied that concept to me, and it was exciting to work with a team equally dedicated. This is not to say that this book is aimed at a Western audience, because we had the intention for this to be read by Sudanese people as an encouragement and a space where our voices and stories can be displayed and heard and if along the journey, others read it and learn about Sudanese culture, that would be a beautiful feat too.

Andariya: What were your favorite stories and why?

Amal: The Baobab Tree by Yasmin Sinada; O’Halfa by Maida Ahmed Akasha; Memoirs of Possibility by Shahd Fadlamoula; The Patient Ones by Elizabeth Harrison, When my Brother Left; honestly, I could go on and on with my favorites!

Andariya: After working on the book, what themes do you see dominate creative writing on the Sudans?

Rod: nostalgia; a love of varied landscapes; a sense of longing; a sense of pride (in spite of many internal and external problems).

Amal: I think nostalgia is definitely a prevalent theme, pain, memory, love, a sense of belonging. It is hard to limit it down to a few, there were so many pieces and so many themes that came up, but those are the ones that were very noticeable.

Andariya: What is needed to bring Sudanese/South Sudanese stories to the wider African creative writing sphere?

Rod: This is problematic as there is political uncertainty in both countries, and mistrust. Conflict leads to a long list of priorities more pressing than creative writing. Finance is also a problem, along with sanctions from external forces which makes even simple transactions difficult to complete.

Amal: I think there needs to be more emphasis on the importance of the arts, especially within the Sudans. The people that do want to go into the arts are discouraged because they are not following the more traditional routes for Sudanese youth such as medicine, engineering, the sciences etc. which are believed to provide a more stable future. If people were encouraged and didn’t fear that the arts where ‘a waste of time’ then perhaps we would have more stories being written, more poetry, more spoken word artists. After we are able to repair the cultural importance of art within the country, it will be much easier to take it to the outer African writers’ networks. In terms of what we can do right now, magazines like this are amazing to me because they are putting the voices of Sudanese people on display through the most popular medium in this generation; the internet. We need more Andariya’s, more Nas With Notepads; more platforms like this that allow for creativity.

Andariya: Have you considered teaming up with other bodies, e.g. the Caine Prize for African Literature, the Miles Morland Foundation or others for future projects? What about linking with those in Sudan?

Rod: Yes, but it is not so easy: The Caine Prize needs longer articles than our book contains (sadly). If there was substantial funding, we could employ a person to help – even though ‘we four’ have not even drawn expenses and that has enhanced the amount we have donated to charities (already over £2,500).

Amal: Teaming up with organization such as those would have been difficult as they come with their set criteria, and the I Know Two Sudans book is quite unorthodox; if not in its nature, then in the way it was produced. I think the organizations that would be more suitable to cater to the project/book are organizations that promote African literature, rather than help with its production from the conception of the idea.

Andariya: Do you see this competition and book as a one-time project? If funding could be secured, could it be an annual (or at least regular) project?

Rod: We have been encouraged to have a second volume of ‘I Know Two Sudans’; writers want to participate. However, the level of commitment needed to complete a project like ‘I Know Two Sudans’ is considerable, and cannot be undertaken lightly.

Amal: There is a lot of interest in a second volume, and I know many writers who wanted to contribute to the first, but could not make the deadline so it is always a possibility. But in agreement with Rod, the level of commitment is considerable and not something that can be taken lightly for all of us on the editorial team.

Andariya: If you were to compile a second book, what would you do differently as an editorial team? (content,  promotion etc).

Rod: It is essential to have a network of sales outlets. Also, it is essential that in order to meet deadlines the principal editors need to have the time to ‘keep things moving’; the original editors were unstinting in their time given.

Amal: Definitely make sure we set up a network of sales outlets before the launch of the book! To have had a bit more time to organize a bigger launch, as the venue for our first launch was a little bit too small; we underestimated the attention the book was getting.

This article was published in our 3rd Issue: Strides. You can read the full issue here.