What if I told you that your diet is one of the reasons for climate change? Which food is your favorite? Do you prefer meat or vegetables or a balanced mix of the two diets? How is all of this related to climate change? There is an adjacent bond between the production and consumption of meat, and climate change. If you eat too much meat, you should reconsider your diet, for the sake of the environment and for yourself as well. You see it as just a piece of meat, or delicious steak, a sandwich of chicken or fish. You think it won’t play a role in the larger scheme of things, but did you know that meat production is one of the causes of climate change and global warming, water pollution, soil degradation, deforestation and desertification, land depletion and also the extinction of some plant and animal species? 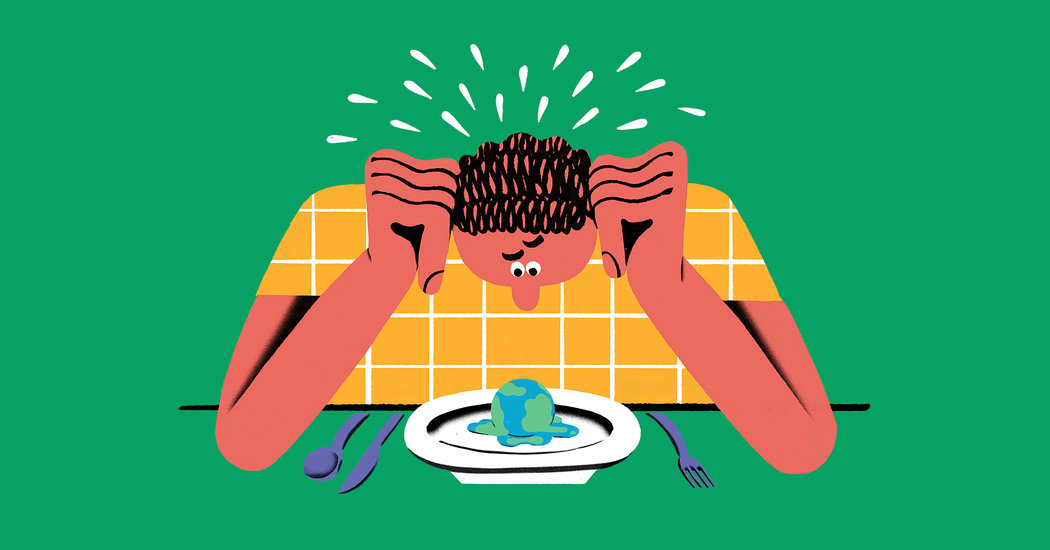 Deforestation and land use to feed animals are a major cause of climate change and increased greenhouse gases. According to the United Nations Food and Agriculture Organization (FAO), "Livestock is the world's largest land resource consumer" - livestock use more than 80% of farmland for grazing. One-third of the crops produced go as livestock feed. The lands used for animal fodder and grazing are twice the area used for other agricultural purposes. With the increase in population, there will be an increase in the demand for meat, thus more exploitation of lands. There may come a day where no lands are available to grow crops consumed by humans. For example, more than 90% of the Amazon rainforest has been deforested to grow animal food crops. For what? To meet the human needs of meat / because getting one pound of beef requires 5 pounds of fodder if it is rich in protein, and 20 pounds if it does not contain much protein.

Did you know how much one meal of meat is measured against the square feet of deforested land? One meal of meat = 55 square feet of forest. So it's best to go for other options, or reduce your meat consumption. Please think about these questions every time you eat meat. If yes, you can happily continue eating. How many trees have been removed, how many liters of water were consumed by cattle and used for their food crops, and how much gas was released due to this meal? Do you get a great nutritional benefit from this meal?

As for water consumption, these food crops consume large amounts of water other than drinking water consumed by the livestock. Vegetarian products do not consume as much water as animal products. Imagine that we planted wheat and corn, which were consumed directly. Similarly, we planted a crop as food for cattle, and then we eat the products of this cattle. The eventual goal of growing the two crops is to produce human food. The difference lies in getting the food directly in the case of the first crop, and getting it indirectly from the second crop. 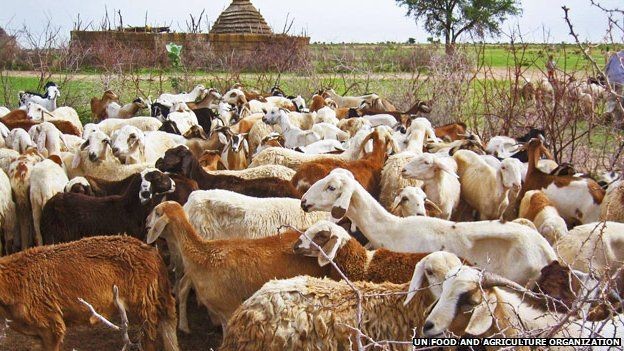 Is the amount of water consumed to produce the two crops equal? Not to exaggerate, but think about it, you need this meat as food, and the livestock producing this meat also needs food and water. Here comes the consumption of water in large quantities, plus the use of vast areas of agricultural land.

Besides, the energy consumed in animal farms comes in other forms such as agricultural machinery and fuel used for transportation of meat. This as well contributes to carbon emissions. Animal dung and its liquid and solid residues are another source of methane and nitrogen, which contribute to the destruction of the ozone layer. Learn more about cattle’s contribution to global warming on this website.

Residues following animal slaughtering (blood, intestines, dead animals, etc.) are no less harmful. If not disposed properly, environmental disasters may happen especially if they were to be disposed in rivers or any water source. This would cause damage to marine organisms, as well as polluting the water. The United Nations Food and Agriculture Organization has linked animal feed crops to water and soil pollution with waste, fertilizers and pesticides. That’s why much attention needs to be paid to the process of getting rid of these wastes, in a way that does not cause any environmental damage. There are wastes that are need to be permanently disposed, and wastes to be reused. What is important, however, is the immediate disposal of unwanted waste, and not to mound it for longer periods of time. Sometimes waste is randomly disposed and thrown in the streets. Moreover, some slaughterhouses are located near residential areas.

There are even a number of measures for the slaughterhouses that must be enforced, such as: cleanliness of the slaughterhouses, ensuring that the disposal of waste is conducted a correctly, personal hygiene of the workers, regular checks on workers, ensuring the right treatment of animals. To achieve all of this, laws must be defined to protect the environment regarding the raising of cattle, meat production and distribution. We also need to tax any violation of these laws, control of markets, conduct periodic inspections of livestock and poultry before and after slaughtering.

What is the solution?

If you want to contribute to reducing climate change, you should change your food diet. Specifically, you should limit your intake of meat, and adopt a vegetarian diet instead. Everyone should take their part - individuals, communities, governments and organizations. Changing the dietary habits of individuals and whole communities may not be easy and unrealistic. However, a balance between the two systems will be more realistic. Awareness campaigns on the effects of meat consumption should be undertaken, and the community should be encouraged to participate in these campaigns by targeting school and university students and engaging them in environmental work in general. The press and media should also participate - with the emphasis that it is not intended to interfere with the eating habits of individuals, or to prevent them from eating what they like, but only to reduce meat consumption and balance the consumption of meat and vegetables. 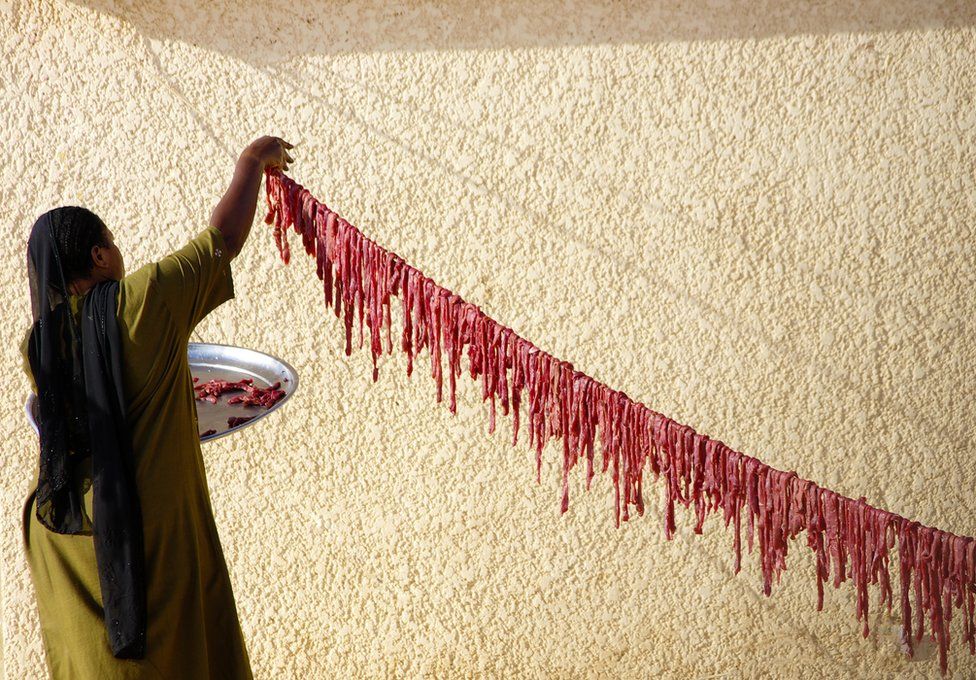 In the case of adopting a vegetarian diet, communities will be the biggest winners. For example, in terms of nutrition, it is better to eat vegetables directly to benefit from their high nutritional value, instead of saturated fats in meat. This would help us in maintaining our health and prevention from disease. Is this the only benefit? Of course not; there are environmental, climatic and health benefits, such as: reducing emissions, reducing consumption of water through less meat production, maintaining fertile land, producing more crops and providing food sustainably to all.

Sudan as an Example: can individuals switch to a vegetarian diet?

Perhaps this is almost impossible because eating meat is linked to social customs that are difficult to change. For instance: during marriage and reception ceremonies of newborns cattle are traditionally slaughtered. These habits have been rooted in society for years, with no awareness of the dangers of meat production and eating. Even environmental organizations do not lead or adopt meat production and consumption awareness campaigns. In the beginning, intensive awareness campaigns must be conducted, led by young people active in the field of the environment. The focus then should be on issues of sustainable meat production, distribution and supply. 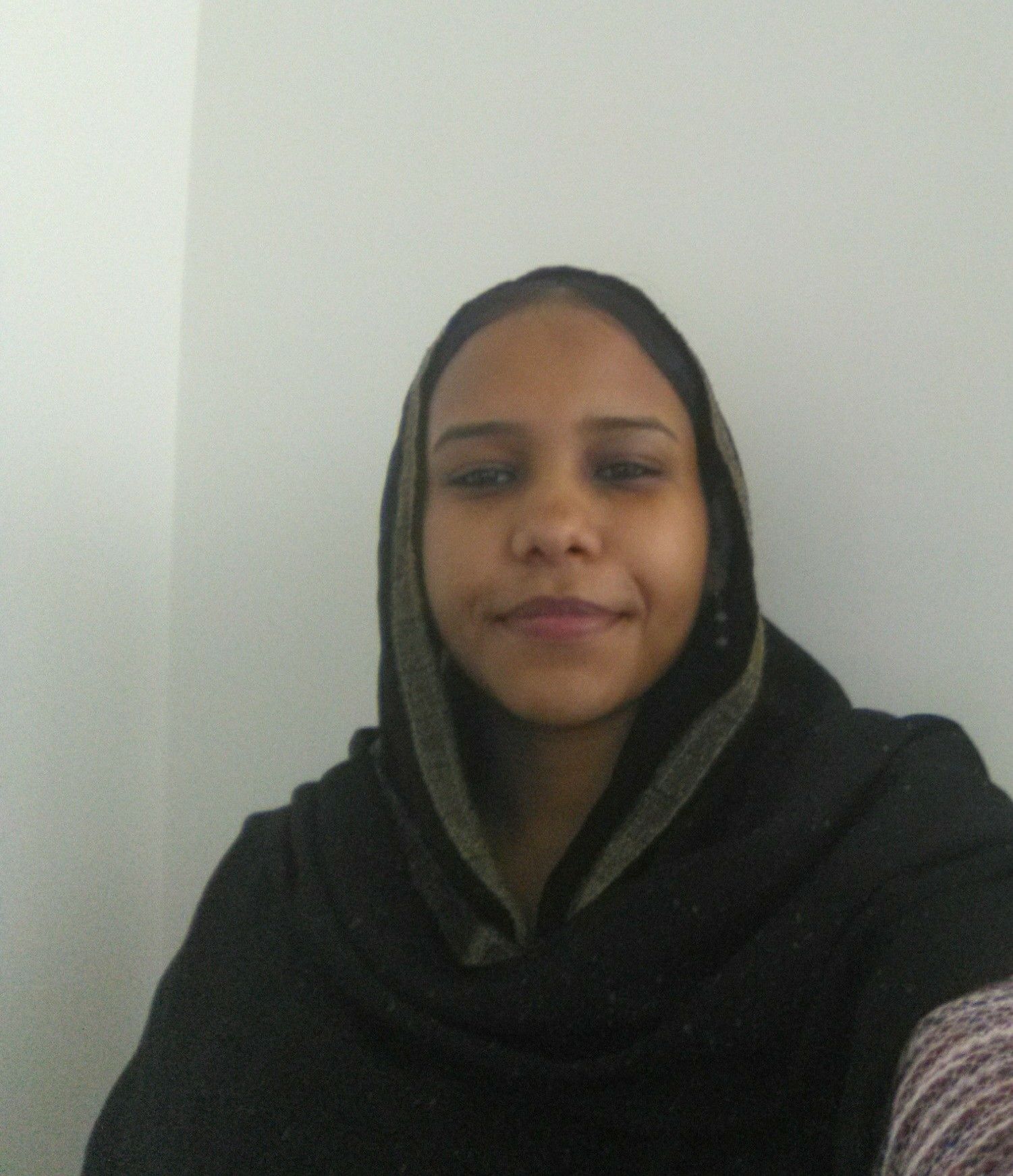 Rona is interested in climate change, its causes, its dangers and the ways of addressing it. She writes articles to raise awareness of all these issues.