Thirst in a River Basin

Water is a basic need for human life and health. But many parts of the world are facing a worsening water crisis – just as water is needed more than ever to prevent the spread of Covid-19.

This is the case in Africa’s Nile River basin. The Nile River is the longest river in Africa and the disputed longest in the world, with a basin encompassing parts of 11 countries, from arid Egypt and Sudan to the mountainous highlands of Ethiopia and Eritrea, the vast Sudd wetland of South Sudan, and the fertile rain-fed soils surrounding the enormous Lake Victoria in Kenya, Uganda, and Tanzania. 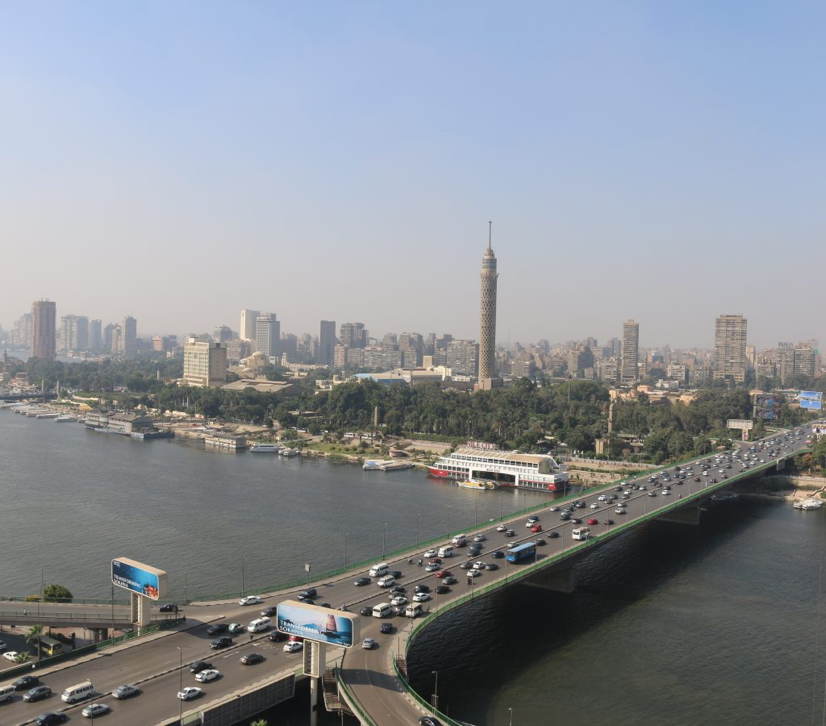 The Nile in 'Almarai', sans-serif !important, Egypt from above. Egypt, Ethiopia and Sudan are currently in negotiations mediated by the African Union over the filling of the Grand Renaissance Ethiopian Dam, which Egypt fears will reduce its water supply.

An August 2019 study by researchers at Dartmouth College found that while rainfall is expected to increase in the Upper Nile Basin, more hot and dry years combined with rapidly increasing populations are expected to stress agriculture, the region’s economic backbone, and reduce the availability of water for the basin’s people.

The increasing climate threats come amidst rising geopolitical tensions over water. In August 2020, Ethiopia started to fill its colossal Grand Ethiopian Renaissance Dam on its segment of the Nile, a people-funded project that will become the largest hydroelectric power project in Africa. Downstream Egypt and Sudan fear the dam’s potential impacts on their water supply. 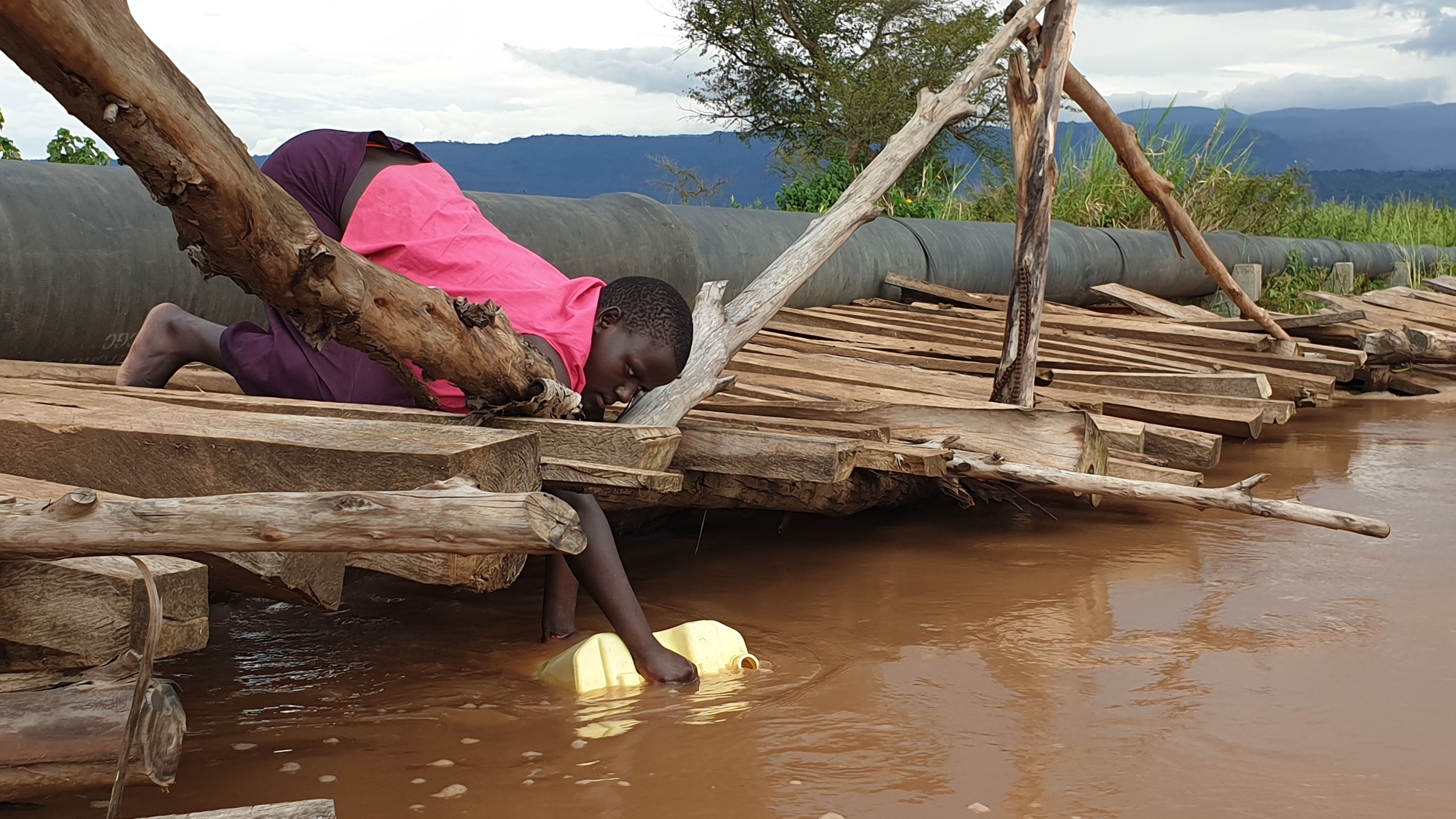 Julia Asekenya of Tajar Kolir in Bukedea district, Uganda, collecting water from the nearby stream. Asekenya stays in one of the camps in Bunambutye where survivors of the 2018 Mt. Elgon landslides were resettled, which residents say lacks sources of clean water.

How are communities in the Nile Basin accessing clean water to keep themselves safe during the pandemic, as water scarcity increases and climate change disasters worsen? 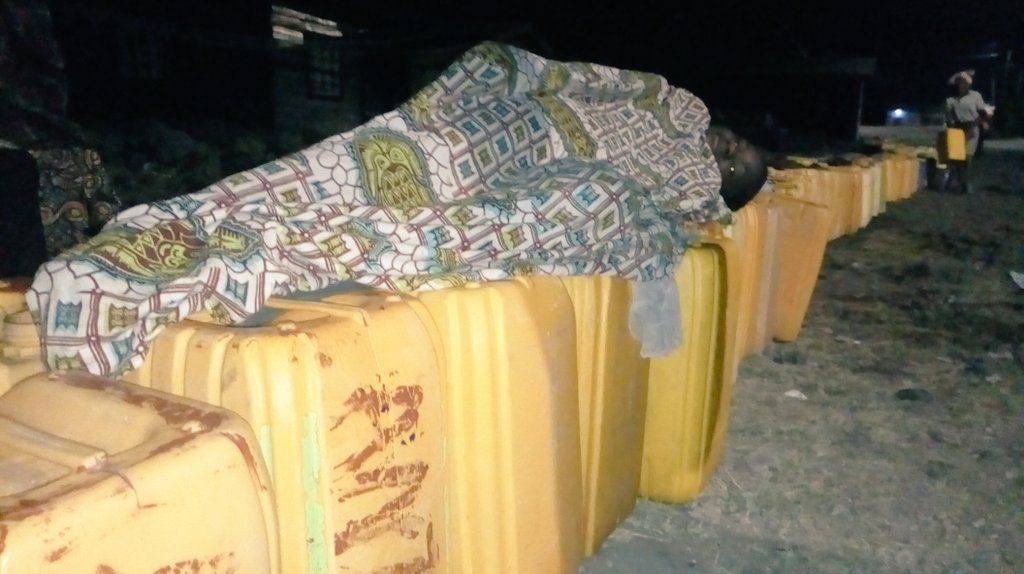 Caption: The import of drinking water from Gisenyi, Rwanda to Goma, DR Congo was impacted due to the Covid-19 border closure, affecting access to clean water for thousands of Congolese.

InfoNile, a geojournalism network of over 500 journalists in the Nile basin, worked with 32 journalists from nine Nile Basin countries to report on their water challenges and solutions in a time of crisis, conducting data-based reporting in partnership with Code for Africa. Most of the journalists worked in pairs: collaborations between a TV, newspaper, or online journalist and a local radio journalist.

The InfoNile interactive map pinpoints the areas most vulnerable to changing rainfall and runoff patterns – factors that contribute to droughts and floods – and those that are already facing water scarcity. Vulnerable communities are even more at risk when faced with droughts and floods that destroy water and sanitation infrastructure.

To measure access to water, InfoNile mapped data from the Demographic and Health Surveys and Multiple Indicator Cluster Surveys showing the percentage of households with access to an improved water source, such as piped water, protected wells, springs or boreholes, and rainwater collection.

To measure rainfall and runoff, InfoNile mapped data from the UN-run Flood and Drought Monitor showing historical rainfall/runoff data starting from the year 2000 and climate change projections data for 2020-2035.

The bluer areas represent places with more rainfall or runoff and higher access to water; the grayer areas with less. 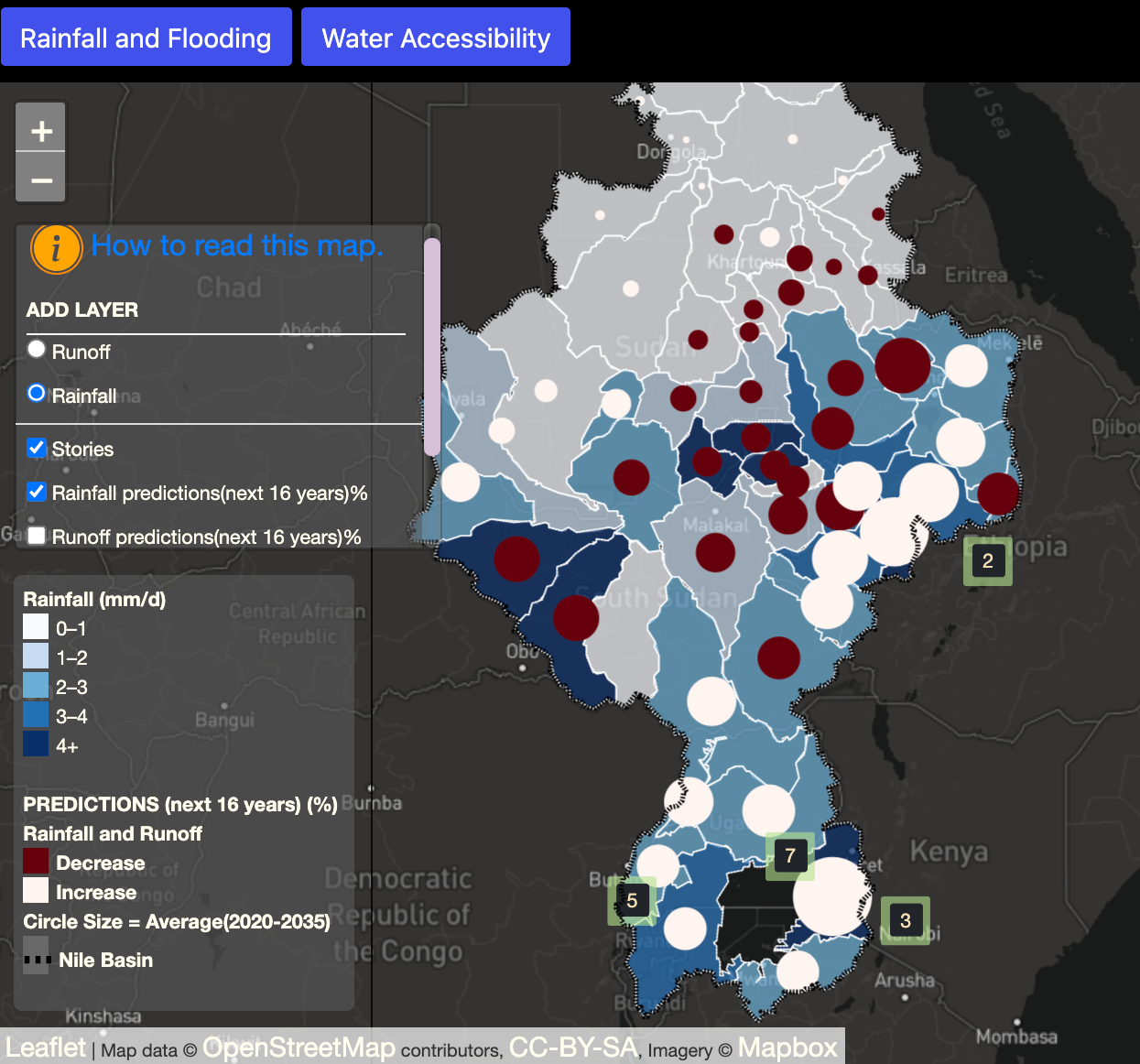 Likewise, users can click Stories to see data-driven stories by our journalists on water scarcity and flooding during Covid-19.

When moved, the slider at the bottom enables users to see historical rainfall and runoff data for each sub-region and projected climate change data up to 2035.

Can we expect a longer wetter season?

Some of the largest expected increases in rainfall are in the areas that are already experiencing the highest amounts of rainfall in the basin – such as the Lake Victoria basin, which includes parts of Uganda, Kenya, Tanzania, Rwanda and Burundi.

Heavy rains last year around the lake resulted in floods that killed hundreds of people, displaced thousands, and destroyed crops and infrastructure. Lake levels were the highest on the historical 60-year record.

The map also shows small increases in rainfall in parts of Ethiopia, particularly around Bahir Dar, the Blue Nile, the Didesa River, and parts of northern Ethiopia. A 2018 study on the effects of climate change water resources in Ethiopia concluded that streamflows will likely increase, but the main rainy season will become less intense, with rainfall more spread out throughout the year. This could result in “increased water availability for rainfed agriculture, domestic consumption, and hydroelectric production,” and Sudan and Egypt could also benefit from the more constant and increased water flow 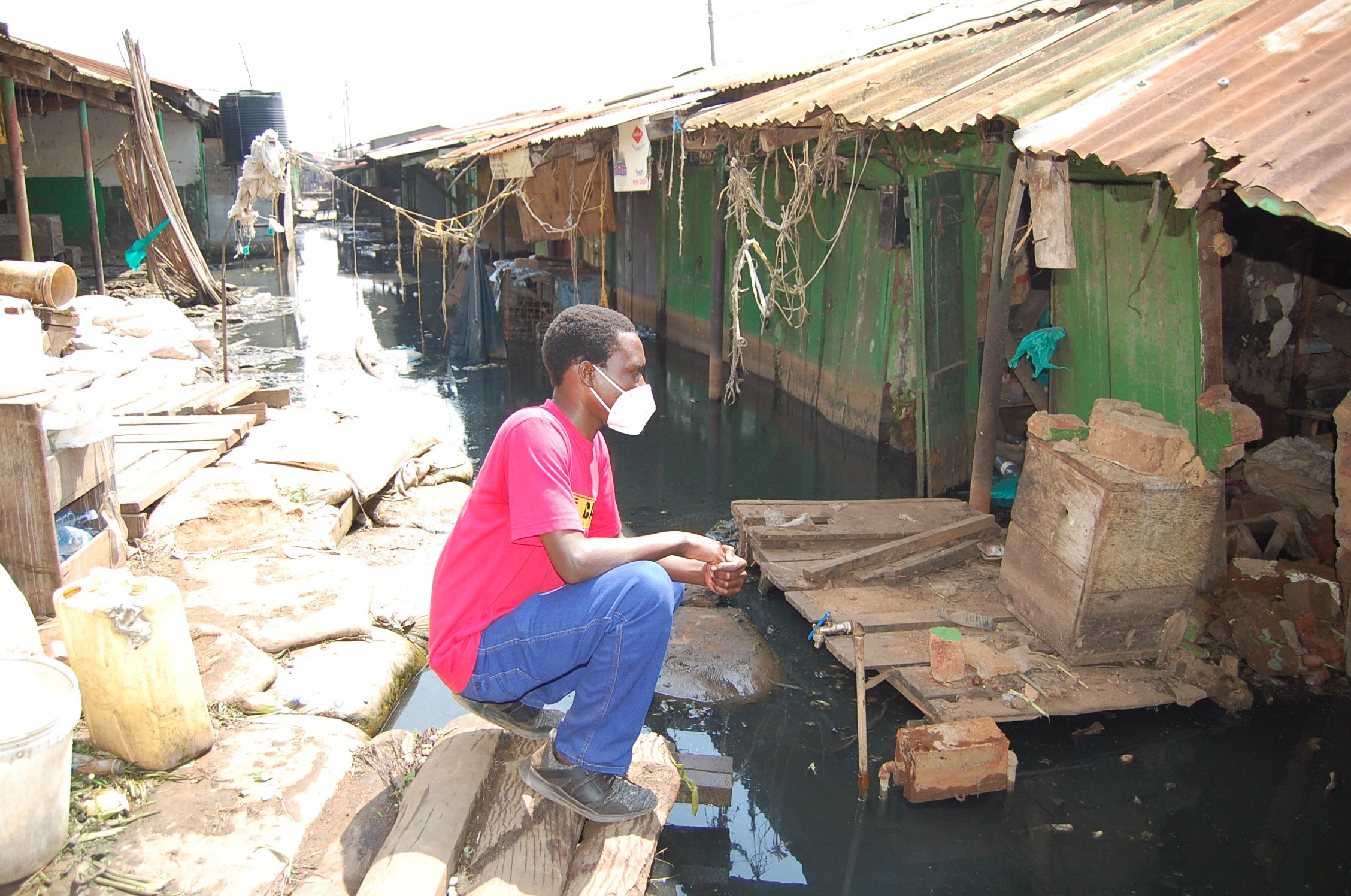 Noah Omuya, the journalist who covered the InfoNile story on floods in Uganda, visits the flooded Ggaba market on the shores of Lake Victoria in Kampala.

The map shows moderate decreases in rainfall in much of South Sudan, especially in the southwest and around Malakal in northern South Sudan, with small increases in other parts. A USAID report shows that the country is experiencing large variability in rainfall, with rapid changes between severe droughts and damaging floods. Sudan and Egypt are still to receive the lowest amounts of rainfall in the Basin.

Will there be more floods?

Excessive runoff results in flood conditions displacing millions of people. The World Bank Climate Change Portal indicates that 6.8 million people were affected by floods in countries within the Lake Victoria Basin between 1985 to 2018. Floods also have the potential to transmit communicable diseases such as typhoid fever, cholera, hepatitis A, malaria, dengue, yellow fever, and West Nile Fever, according to the WHO. Along with rainfall, runoff is increased by deforestation and the destruction of wetlands that absorb water before it flows into streams and rivers.

According to predictions, more floods could be experienced in the future. The map shows the highest rates of runoff around western Ethiopia, southwest South Sudan, and the Lake Victoria basin – and expected increases around Lake Victoria, particularly along southeastern Kenya and northern Tanzania.

Decreases in runoff are expected across Sudan, northern South Sudan near Malakal, and near the Dindar River, a Blue Nile tributary in Sudan and Ethiopia. The map shows smaller increases in Ethiopia around the source of the Blue Nile. However, increased surface runoff is not expected to correspond with an increased water yield in Ethiopia’s Upper Blue Nile basin – partly due to an expected decrease in baseflow, which is water stored in bedrock, according to a 2021 study.

How are water and sanitation impacted by climate change? 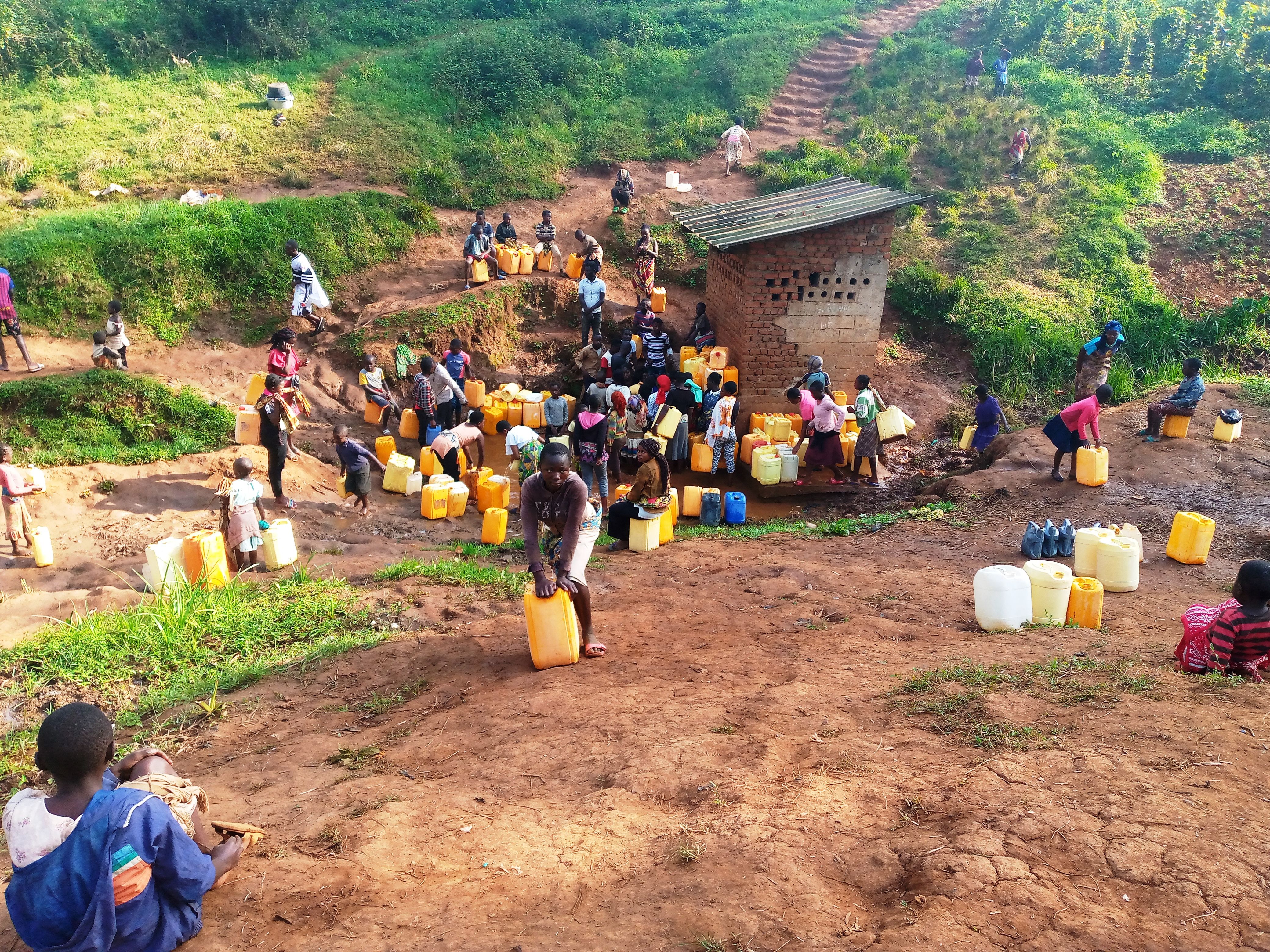 Access to water in Butembo, eastern DR Congo, is a challenge, where a slew of humanitarian-constructed water projects charge expensive fees, and the natural water sources are linked to the spread of disease.

Access to water varies greatly in the Nile Basin, from less than 50 percent of households that use improved water sources in parts of Darfur and DR Congo to almost 100 percent access in Egypt – although most sub-regions in Nile Basin range around the 60s-80s percentiles.

For example, more rainfall and runoff is expected in some areas of western Uganda that struggle with lower access to clean water. These shifts in climate could provide people an opportunity for more rainwater harvesting – but at the same time presents a possibility of increased floods, a risk to water infrastructure.

It is projected that the region’s demand for water is likely to surge in the next few decades with the rapidly growing populations likely to drive increased consumption by people, farms, and companies.

Now, more than ever is the time to ensure everyone everywhere has access to safe water and a toilet. 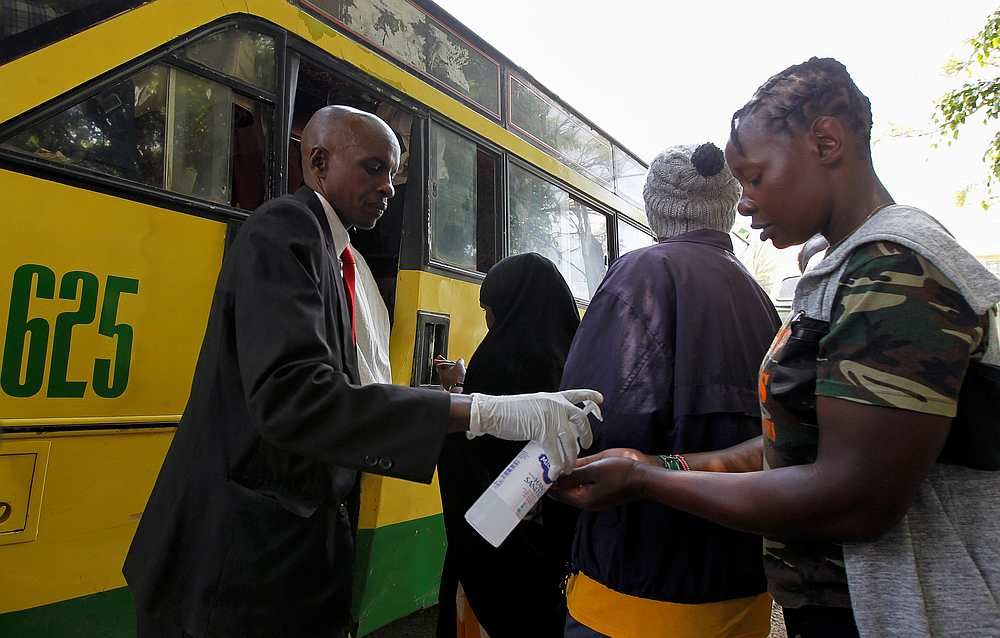 Free hand sanitizer at a bus station in Nairobi, Kenya. Community-based organizations such as SHOPCO are helping people in the Kibera slum access clean water during the pandemic.

Developing countries like the Nile Basin states are most at risk during – and in the aftermath – of the current Covid-19 pandemic. According to UNDP, income losses are expected to exceed USD $220 billion in developing countries. These losses will reverberate across societies, impacting all sectors. The fight against COVID-19 must continue in the Nile basin alongside the struggle against environmental, economic, social, and health challenges; lest a multifaceted crisis will emerge.

InfoNile is a cross-border group of geojournalists with a mission to uncover critical stories on water issues in the Nile River Basin through data-based multimedia storytelling.