Revolt of Songs in Sudan 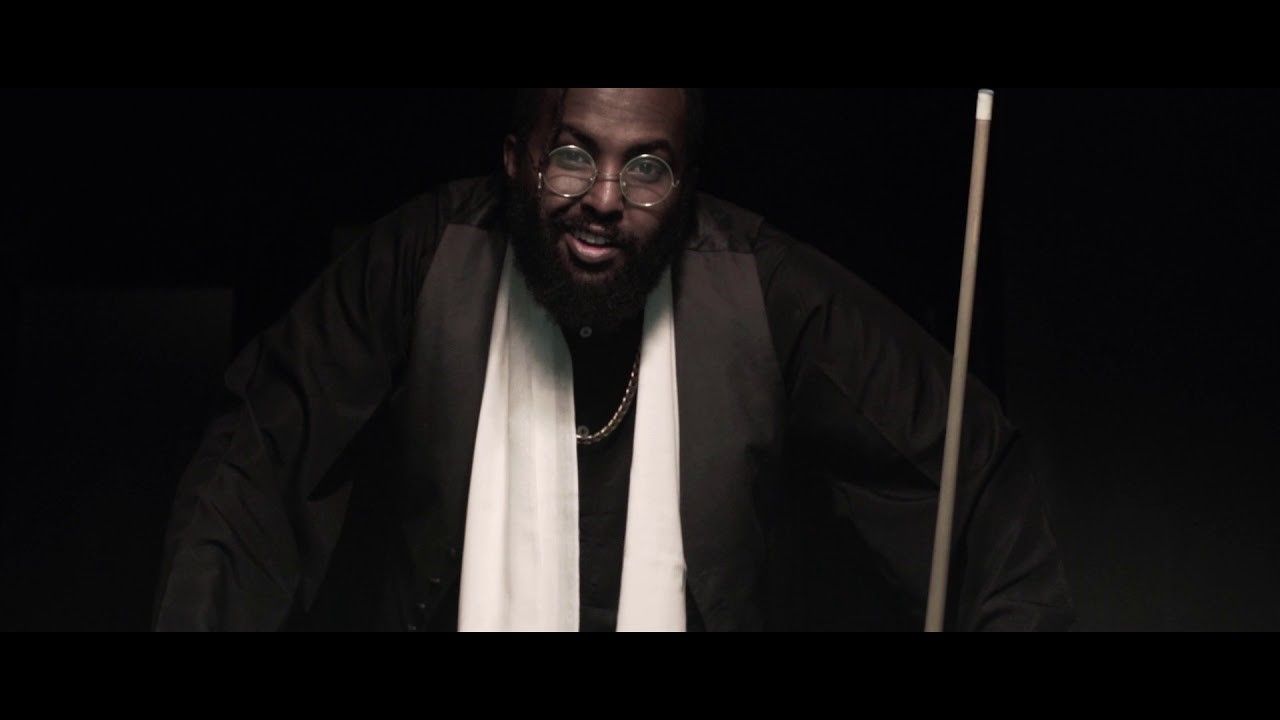 During the course of human history of uprisings and revolutions, songs played a crucial part as they entertained and ignited the souls of the revolutionaries and proponents of positive change, and documented important parts of history. According to Wikipedia, the French revolution had six main songs with messages of hope about a better future for France, political sarcasm about the monarch rulers, or patriotism as in the case of “the song of departure” (chant du depart), which was considered as the national anthem of the French Empire after the fall of the monarchy. The French revolution also had a song about vigilance called “The Permanent Guillotine”, and “let’s ensure the salvation of the empire” which was Napoleon’s national anthem. France’s current national anthem, “La Marseillaise” was written in 1792 AD.

Role of Songs in the Sudanese Revolution

Songs played a major role in the Sudanese revolution by motivating protesters. They had a comforting and healing effect as they addressed many sour events during the revolution like the massacre of June 3rd 2019 as expressed in the rap song Blue by “Flippter”.

The main emotions that these songs provoked were mainly vigilance before Omar Al-Bashir’s regime collapsed, joy after the downfall, grief and pain when the June 3rd massacre happened, and anger whenever a protester is killed or a political agreement is annulled. They also represent a written and audio monument of memories of the revolution that can stand the test of time and would always trigger the feelings, emotions, and memories of the current and future generations in Sudan.

Songs may also serve as references for historians and researchers just like the Arabic poem that was recited by Shibl bin Abdulla that he sang to Abo Al-Abbas Al-Saffah. The poem documented the success of the Abbasid uprising against the Umayyads and starts with the verse: “The reign is now solid in its roots for the good ones from the Abbasids”.

The songs of the Sudanese revolution documented most of the important milestones of the revolution, such as the beginning of the uprising, the fall of Omar Al-Bashir’s regime, June 3rd 2019 massacre, the post agreement era between the civilians and the military, and the military coup of October 25th 2021.

Most of the songs heightened the sense of unity and cultural identity among protesters, and influenced them to join their efforts in one united front against oppression. They persuaded people and created positive momentum for the revolution. 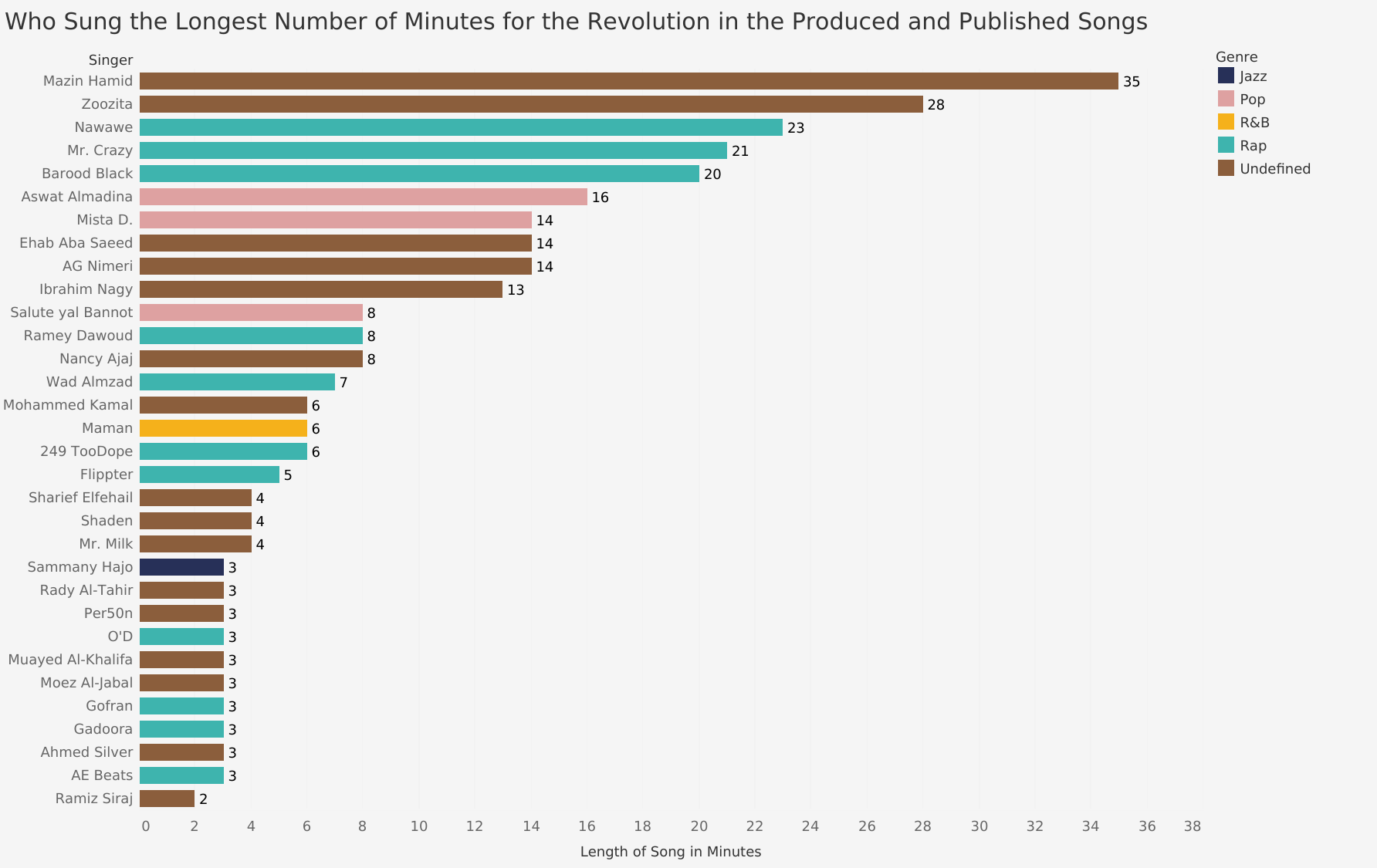 Length of all revolutionary songs in minutes

Music production takes a lot of time ranging from weeks to months and data above shows the length of the songs that the artists published on their accounts in YouTube, Anghami, Sound Cloud, or Spotify. The musician with the longest number of minutes was Mazin Hamid, with a total of 35 minutes. The other musicians' songs are in this descending order; Zoozita, Nawawe, Mr. Crazy, Barood Black, Aswat Al-Madina, Mista D, Ehab Aba Saeed, AG Nimeri, Ibrahim Nagy, among others.

Most of the artists are solo musicians except for “Salute Yal Bannot” and “Aswat Al-Madina” which are pop bands. Musicians like Ehab Aba Saeed and many others who do not have a great number of followers on social media and are probably just starting their career in singing, prefer to publish their songs on social media channels and Sound Cloud channels of the studio of “Nas Jota”. 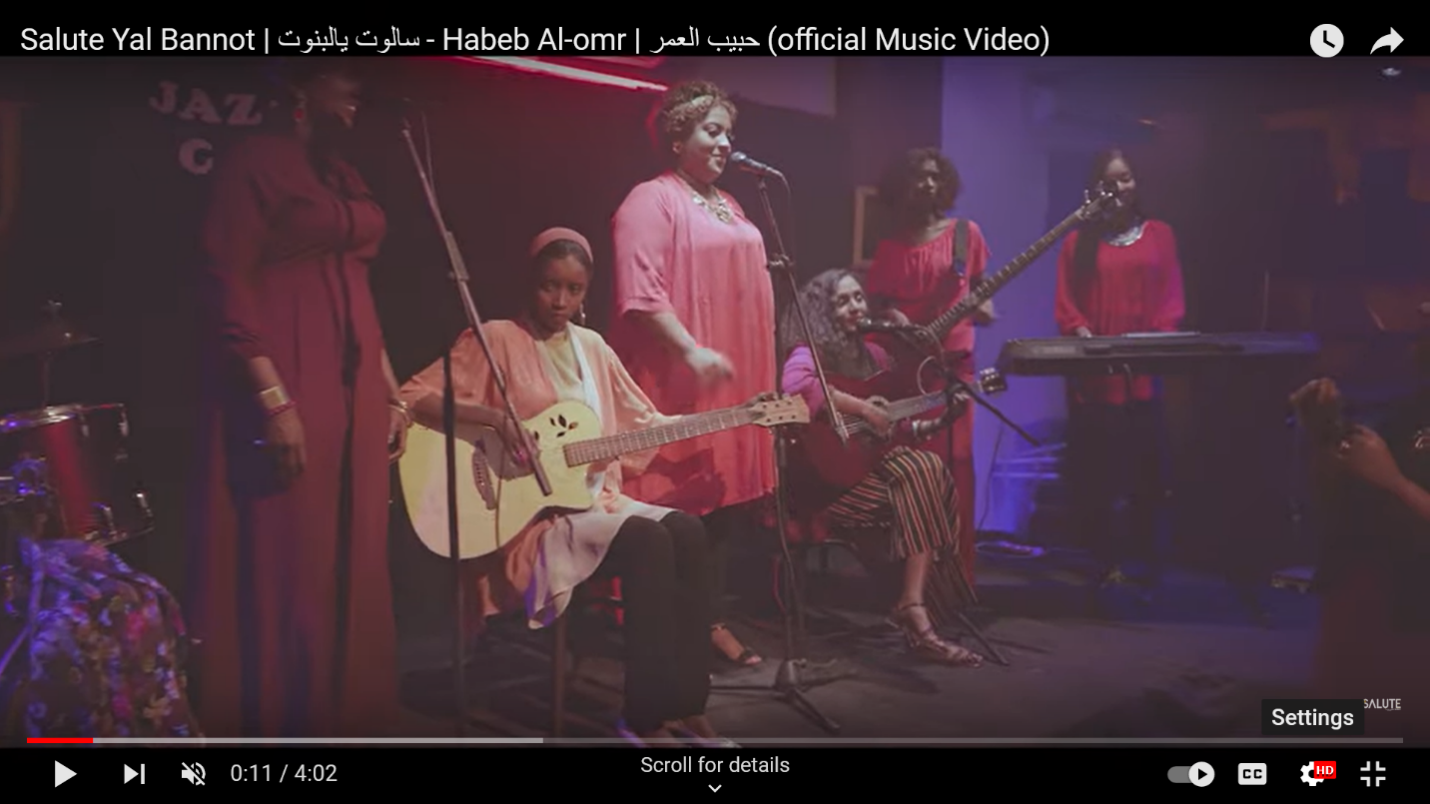 Most of the singers are males and only four are females.

The dominant genre of revolutionary songs is Rap, with ten songs. After rap come pop, then jazz and R&B. 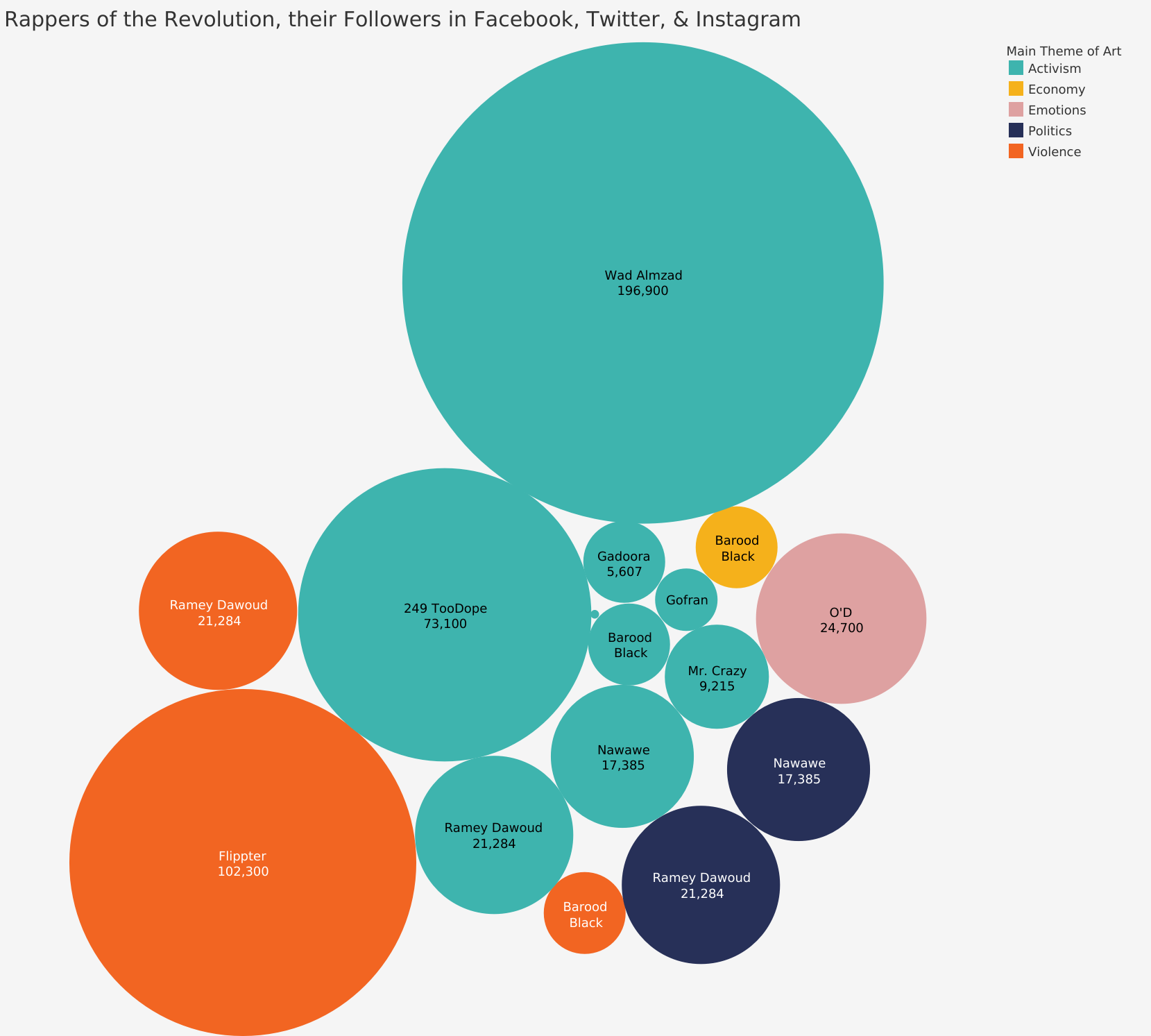 Most of the rap songs were about activism which includes protests, civil disobedience, and sit-ins. Then comes those that reflect upon violence exercised by the government security forces like killings, beating and imprisonments. After that comes pure political songs, then the expressions of grief about poor economic performance and also emotions of hope. Interestingly, rap’s origins are from West Africa, centuries before hip-hop music was invented. As for the rappers themselves, the top rappers in terms of followership on Facebook, Twitter, and Instagram are: Wad Al-Mazad, Flippter, and Tayeb Hajo.

Rap has its own magic compared to other genres as rappers are poetic with a very fast rhythm accompanied by a fascinating act of breath control. Historically the first rappers were affected by jazz, comedy and other genres. When it comes to Sudanese rappers, they are mainly influenced by Sudanese Arabic and its accent, and they choose English sentences that would make the Sudanese Arabic words suitable and the rhythm fluent.

They were also partly influenced by the Haqiba style of music and Sudanese musical instruments. Their songs may have some Western instruments but they also fuse Sudanese musical elements. Rapping was also the favorite music genre choice of the Arab Spring that was ignited in 2011. 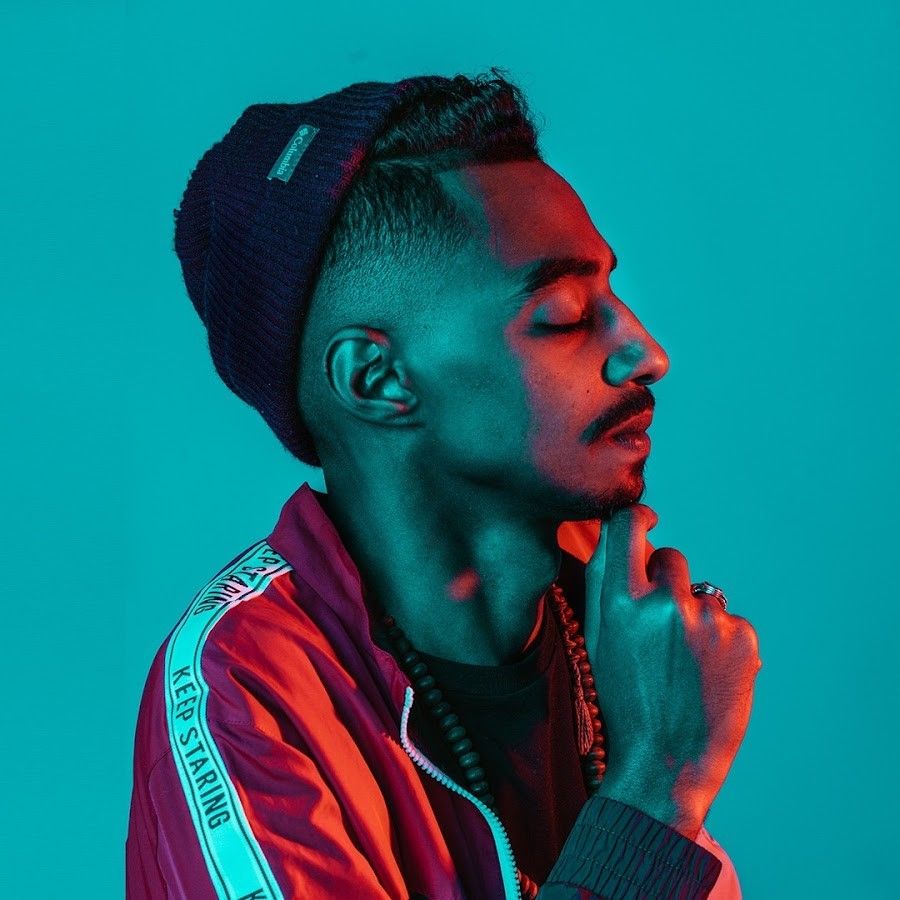 Songs had a powerful impact on human history and the Sudanese revolution, and they delivered many noble feelings and motivations. Songs of the revolution were from many genres, but most of them were rap. Rappers mainly focused on addressing the activism and violence that occurred frequently in the revolution, inspiring unity and fueling momentum.

This article is published as a part of a series mining data for interesting patterns around art and revolution between 2018-2022. The project is supported by the Arab Fund for Arts and Culture, Arab Council for Social Sciences and The Andrew W. Mellon Foundation. 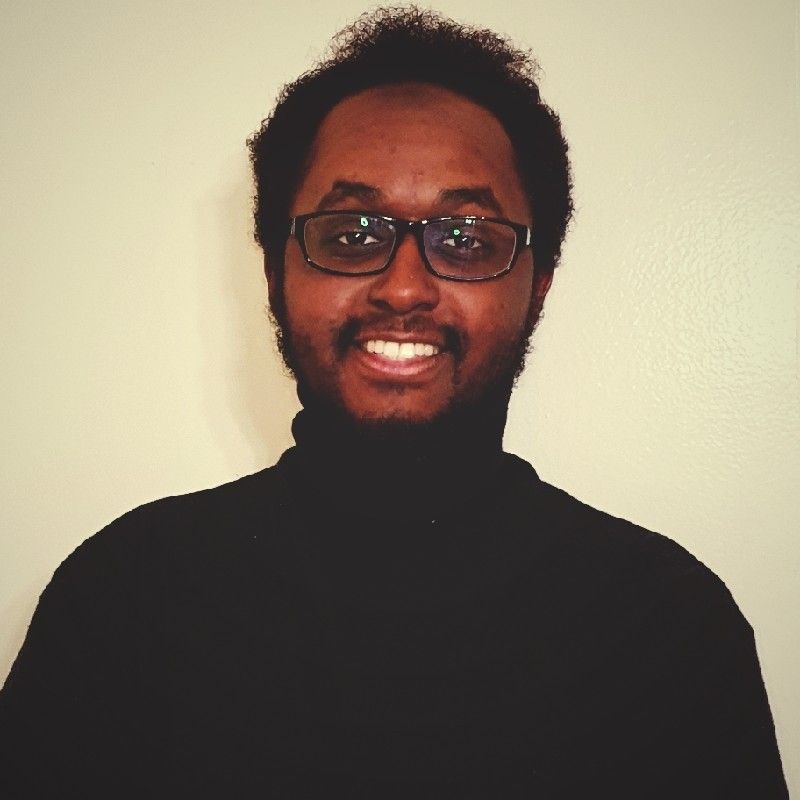 Ahmed El-Affendi is a coffeeholic foodie data journalist, writer, data scientist, and storyteller. He is always interested in exploring cultures of other nations, learning new languages, reading books, and cinematics