Should Women be Paid for Housework?

For the past few months, a debate has been ongoing on twitter under #UnpaidCareWork. The campaign, spearheaded by Uganda Women’s Network (UWONET), is meant to advocate for men to pay attention to their wives and help out on household chores that many believe are a natural woman’s responsibility.

Lauren McCarthy from the Centre for Research into Sustainability (CRIS) in the UK wrote an article published by Business Ethics (titled; There’s no Time for Rest) defining unpaid care work as unremunerated house work including child care or elders care essential to human survival and flourishing. In her article, Lauren explains that worldwide, women disproportionally carryout this work, impacting upon their ability to engage in other activities like leisure, education, employment among other activities enjoyed by their male counterparts.

But could this be another feminists’ campaign seeking gender equality?

Growing up, especially in Africa, mothers were supposed to stay home, give birth to children, take care of them, cook, clean the house, fetch firewood, cultivate crops and ensure their husbands were happy. In several communities, this is still the norm. But these women/mothers never receive a thank you from society, or even their husbands. Society assumes that as their role, women should know better to do all these chores with a smile and then rest without a thank you. However, when men wake up to go to work every morning, they are paid for whatever jobs they do at the end of the day, week or month. Why can’t women, earn from the daily work they do in their households? 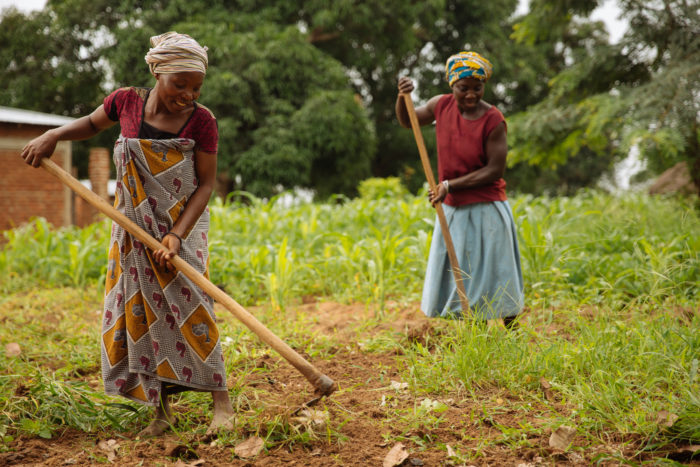 The unpaid care work is heavier than many think, given a chance to stay home and do the same, a man would complain in one second. Recently, a lady was complaining that while her husband lost his job and decided to sit home, she still manages to go to the office every day. But upon returning home, house chores are waiting. She has to clean the house, bathe the children and cook for the family, while her husband watches TV all day. He believes holding a broom to sweep the compound or even preparing a meal is a woman’s job. But why doesn’t he pay her for this very job?

According to the UNICEF Office of Research, evidence shows that children assume care and domestic responsibilities from an early age with an increasingly gendered pattern as they grow. If a child grows observing their parents sharing this unpaid work, he or she will surely do the same. But when a boy child grows seeing only his mother and sisters in the kitchen or changing the baby, cleaning the house and washing dishes, he will not help his spouse in future. Where I come from, in Western Uganda (Ankole), boys were not allowed to prepare food. If found peeling bananas, cooking food or even serving it, their fathers would call them aside and say “men do not do such house work, our job is to go to the field and work, then come home, shower, listen to the radio and wait for your mother and sisters to serve us.” Was this fair? No. In the early days, we would go to the field as a family of men and women, boys and girls. But on returning home, girls would proceed to the kitchen to prepare food, wash dishes and clean around the home, while boys played football and waited to be called to eat lunch. This is what women are fighting against. Unpaid care work has been blamed for low sex drive in women as they are always tired at the end of the day. The campaign was started in Uganda and has now spread across the world, with women asking that their contribution through this work be included in the country’s GDP. 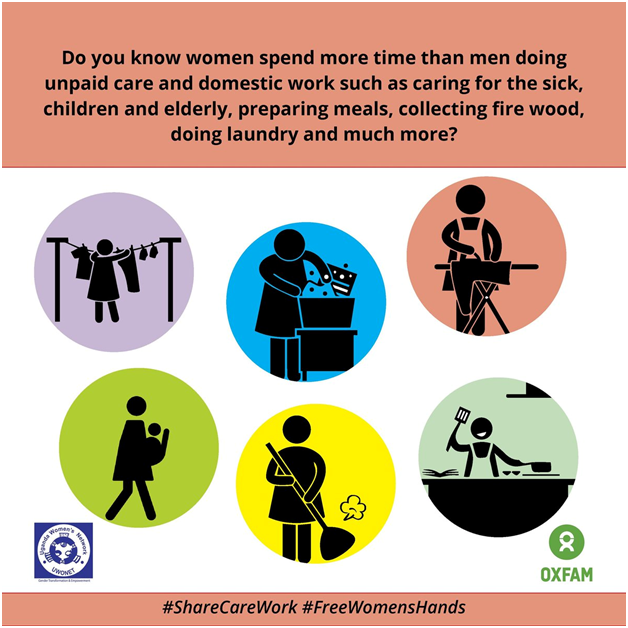 Women spend approximately 30hrs per week on unpaid care work while men only spend 12hrs. Women also carry a heavy burden of unpaid care work which greatly contributes to their perpetual time poverty; which in turn limits their participation in other political, economic and social activities. A woman is made to depend on her husband for all financial help. Men also fear to help their wives as this may attract gossip in society (that he is not man enough that is why he is doing a woman’s work). This kind of stereotype is why women are always sick, complaining about back pain and other diseases that come from too much work without resting.

Be it a working woman or stay at home mother, women are all subjected to this unpaid care work. In the western world, it is a little different as a man returns home with a gift for his wife to say thank you for what you are doing for this family. Some will even enter the kitchen and help out. But in my home village, a man will not even greet the woman, but immediately ask for food he did not even buy, and if it is not readily available, the woman will be scolded or worse, beaten up.

The trend needs to change. Women have no time to rest, this responsibility falls on the shoulders of men, and political leaders to educate those in the village about the value of shared work.

UWONET is an advocacy network with a membership comprising of 16 national women’s organization/institutions and 9 individual women. UWONET is a member of 5 national and 5 regional networks, coalitions and consortiums. The organization fights for the rights of women in communities with an aim of empowering them.