Born in Ibanda District in the Western part of Uganda, Doddridge Busingye is one of the youngest, yet most learned and focused artists in Uganda. Busingye describes his personality as calm and friendly. He is conscious of what surrounds him. When you first meet him, you will see an introvert; getting a word out of him is almost as hard as asking a witch to visit Church. Yet having known him for some years, it was easier for me to spend at least one hour speaking to Busingye. I first met Busingye about 9 years ago during his senior six vacation. We worked a gig together as he and his sister Joan Busingye made some upkeep for the university life they were about to enter. By then, he was already making and selling art.

Busingye graduated in 2015 with a Bachelor’s Degree in Art and Industrial Design from Kyambogo University. He also holds a Master of Arts in Fine Art which he acquired from Makerere University in 2019. He attended Seeta High school main campus for O’level and A’level. 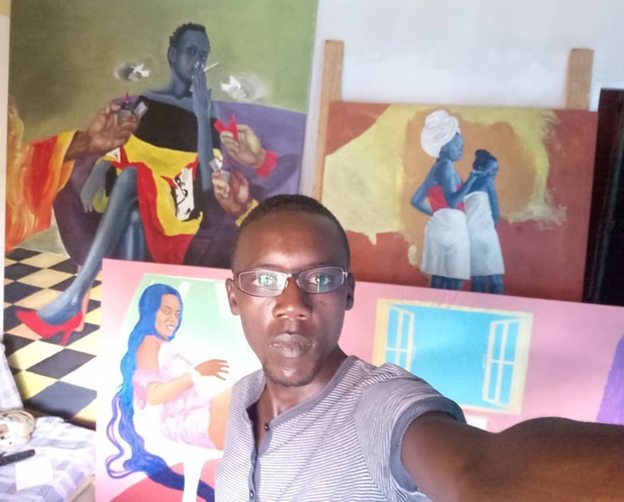 Doddridge Busingye at his studio in Kampala

As a child, Busingye says he played with clay like any other child. He however drew inspiration from his dad and big brother who often drew cartoons to hang in their house. “Dad used to draw cartoons of us as a way of bonding with my siblings and I. Boys were cats and girls were rats. He used to sketch us as a way of punishing us when we did something wrong. He never raised a hand on us. Also, my late brother would draw and hang some pieces from school on the wall at home. I got inspired and would try to do the same” he tells me. Busingye describes his art as conceptual, adding “I mostly focus on an idea and once I conceive it, I think of a way that is most appropriate to communicate the idea. I paint, sculpt, and do installations”. He does video, objects and other kinds of installation, and has done some art that supports the struggle of women.

Even with such talent, Busingye’s father- a lawyer, always saw all his children in the courtroom practicing law like himself. So, like other children, if asked about his future plans, Busingye always said he wanted to become a lawyer. “I pursued so many things, but art was a calling. I wanted to become a flight engineer because my friend’s dad was one. I was so good at mathematics in Primary and always thought this is where I would end up” he narrates. Despite performing well in science O’level subjects, Busingye took up arts in A’level in order to be able to study law, like his father preferred. However, as destiny would have it, Busingye was offered a Bachelor’s in Art and Industrial Design course at Kyambogo University on government sponsorship, and not law which was his first choice. While his dad was willing to pay for him to study law, Doddridge decided to settle for his passion, art.

His heart was at peace when he heard that Kyambogo had offered him Fine Art and says that even when it wasn’t his dad’s choice, he was very supportive. He had promised to find him a job at any law firm after university, since that’s where all his contacts are. Busingye however says that after having a talk with his father, the latter accepted to support his calling, even though he did not understand it. “I had to have a discussion with my father and voice my opinion. When we sat and discussed, he told me the only way he would find me a job after campus was if I became a lawyer like my brothers. But I told him art is what I loved” Busingye says.

By senior one, Doddridge Busingye was already painting and selling art pieces. “I was selling Art from senior 1. Students, especially girls came to me to paint gifts for their friends and mothers. I would draw sketches, gift cards and sell them at UGX2000, while a well-made painting would go for UGX5000. I made and sold my first landscape to a hotel during the Senior 6 vacation. It was so exciting; art has been part of my life, I can say” he recalls.

Despite being on government sponsorship, only tuition was covered and Doddridge had to struggle to buy materials for class. “Being on government scholarship didn’t mean that I had it all, because they mostly supported us on tuition, but the main important part is the materials and course work. My parents would send me money for course work but I also had to support myself, so I would make art to raise some pocket money. When I sold my first landscape at UGX150,000 in the vacation of Senior 6, I continued making portraits” he says. Busingye says that until recently, he has been doing art based on consumer needs before he discovered the role of his art in society, noting “I knew people love portraits, so I would pitch to them, just say, I am an artist and I can paint you, that’s how I used to get jobs.” In his last year at university, Busingye and his friends held an exhibition at a small local hotel in Kireka, hoping to attract possible employers. “I hoped this was going to kick start my career. I have never wished to have a boss, though I wanted to work for a salary, I never wanted to answer to anyone. I thought this exhibition would kick start my career but it didn’t work out. I continued featuring in art festivals like LaBa Arts Festival in 2015 and the year that followed. I got noticed by some art dealers. I also participated in the Street Art Festival in 2014. People started picking some of my art and exhibiting it at some Embassies and other important places. This was towards the end of my university studies” he recalls.

He indicates that after applying to be a part of these festivals, they were contacted and given a small budget to buy materials to help them. This was his biggest platform and he never had to knock on gallery doors seeking help. Busingye competed in the Sadolin MabArti challenge in 2016 and won with a piece titled “Reflection of Kampala.” 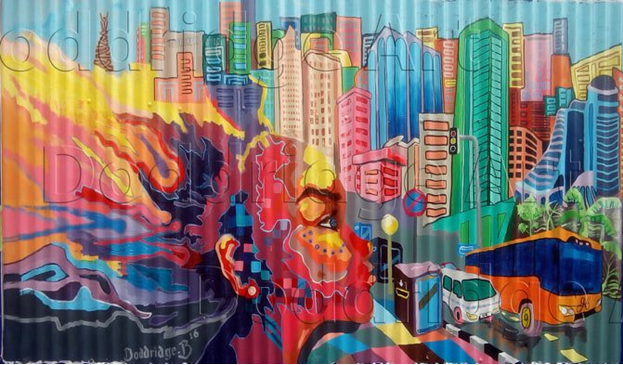 Doddridge’s winning piece The Reflection of Kampala at MabArti Challenge

Doddridge Busingye has over the years participated in the fight for women’s rights. In 2016, he painted a piece for the “something for something” campaign that was discouraging older men from using young girls as a sexual object in exchange for money. The campaign was popular both on social media and mainstream media with the Ministry of Health and its partners. Partners fighting against HIV/AIDS were especially interested in discouraging old men from using money and other gifts to lure young girls into sex and infecting them with the deadly disease. Busingye tells me that finding purpose in his art made him realize that he needed to serve the community and keep his followers in check -especially on social media- by communicating using the best way he knows, through art.

During the same period, another campaign encouraging young women to stand by their choices titled “My NO is a NO” was launched. This campaign advocated that a woman could refuse a gift, a marriage proposal or anything they did not feel comfortable doing and this should be respected by society, especially by people of the opposite sex. He tells me “this piece in particular was inspired by a friend, who on her way from campus was offered a lift by a strange man and she said no. She had walked some long distance and still had more miles to walk, but she stuck to her no for fear of being raped or worse, killed by this stranger. Some of us men think that a woman accepting a gift from you is consent to sleep with her, but that is wrong. I wanted to let my sisters and friends know that some of us do understand and support them”. 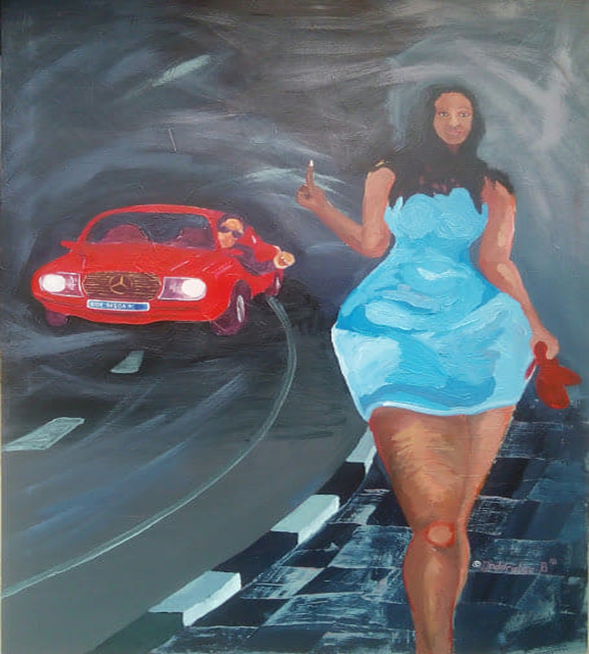 In preparation for his first exhibition, Busingye says he painted a piece in support of working women, especially in the corporate world. The piece is for women who have to walk around in heels every day, to impress a boss, close the deal and later go back home to take care of the family. He equates a woman’s hustle to walking on nails. Busingye hopes that with such art, women will get inspired to keep going and never stop for anyone or anything just because of their gender. 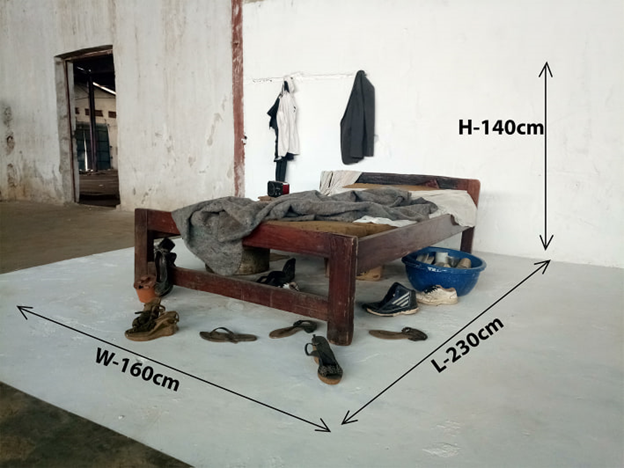 Busingye’s art piece “The Master Bedroom” that earned him USD 1,500

Busingye worked with artists including Ann Kansiime, a renowned Ugandan comedian, Eddy Kenzo, one of Uganda’s biggest musicians, Lydia Jazmine a local singer, among others for body art. With a studio in his home, Busingye utilizes all the time he has to make art. Reflecting on his career, Busingye says he has one special moment he will always cherish; the day he sold the most expensive of all his paintings, “The Master Bedroom” at USD 1,500 in 2018. “I named the price because the work was relevant to the person who wanted to buy it. After this sale, I have been charging portraits at about the same amount” he says.

Asked about the effect of COVID-19 on his planned exhibition this year, Busingye tells me he is not certain what will happen. “I’m still not certain since I intend to show between August and November. But if the lockdown crosses June, then I will have to postpone.