Coral Reefs of the Red Sea – Hanging In There!

If you happened to be on a SCUBA diving or snorkeling trip to the Great Barrier Reef, Australia, in early 2016, or in Hawaii a few months earlier, you would have witnessed a confusing and ghostly scene. Instead of the coral gardens you were expecting with their vibrant pinks, purples, blues, yellows, and greens, you would have been met with an overwhelming and almost florescent whiteness… White calcium carbonate skeletons as far as the eye can see, with squiggly lines of sunlight flickering across their surfaces as if frantically searching for something that was no longer there … You would have witnessed first-hand a glimpse of the longest ever global coral bleaching event in recorded history…

And yet, if you were diving in the Sudanese or Egyptian Red Sea, you wouldn’t have even known there was anything going on! The reefs would have looked just the way you’ve always known them – bright, colorful, and full of life! Why is that? And what is coral bleaching anyway?

Corals tend to respond to stress by losing their color. The tiny coral animals (close relatives of jellyfish) are responsible for building the bush- or boulder-like calcium carbonate skeletons that are easily visible to divers (and which are easily broken if you are not careful with your fins). On their own, these calcium carbonate structures are white. What gives corals their bright colorations are the pigmented microscopic algae that live inside the colorless coral tissue that covers the surface of the skeletons. But color is merely a pleasant side-effect of the algae’s main and very important function. Similarly to the way plants create food for themselves, these algae use solar energy to make their own food and feed the coral animal in whose tissues they live. In other words, in exchange for some basic nutrients and a place to grow, the algae provide the coral with the majority of the food it needs to stay alive and keep growing. But, for reasons that scientists are still working hard to understand, when coral is under heavy stress, it kicks the algae out of its tissues, thus appearing white to the eye. This means that a bleached coral is not just white, it is also starving. And, if the stress continues long enough, the coral dies, and its white skeleton is overgrown with brown slime.

There are many different types of stress that can cause corals to bleach, but the main stressor that is capable of causing massive bleaching events on a global scale is that of unusually high temperature. Due to climate change, ocean temperatures are rising at a rate that corals and other marine life cannot keep up with or adapt to. This means that we are now seeing more and more of these global bleaching events, and that coral reefs worldwide are critically threatened.

This is rather bad news for hundreds of millions of people on the planet who call tropical coastlines home and rely on coral reefs for their survival. The death of large sections of coral reefs following severe bleaching doesn’t just mean loss of beauty and vibrancy. Once corals die, many of the fishes that live on the reefs either leave or gradually die off as well, leaving behind a much less productive and less diverse ecosystem. This means loss of food and income for fishermen and their families, as well as loss of jobs and billions of dollars worth of global income from marine tourism. As usual, those who will be hit the hardest by these changes will be developing countries, small island nations, and poor coastal communities.

This most recent global bleaching event was indeed caused by unusually high ocean temperatures. The National Oceanic and Atmospheric Association (NOAA) in the US declared it the longest bleaching event in recorded history, starting in late 2014, and still ongoing well into 2016 (on-and-off in various parts of the world as summer rolls over between the northern and southern hemispheres). The warming was aggravated by a phase of a natural climate cycle. This phase, known as El Niño, together with ocean warming brought about by human-induced climate change, compounded to cause this massive event. Reefs around the world from the Florida Keys, to the Caribbean, the Great Barrier Reef, and the Indo-Pacific, bleached white with varying degrees of subsequent coral death depending on location. 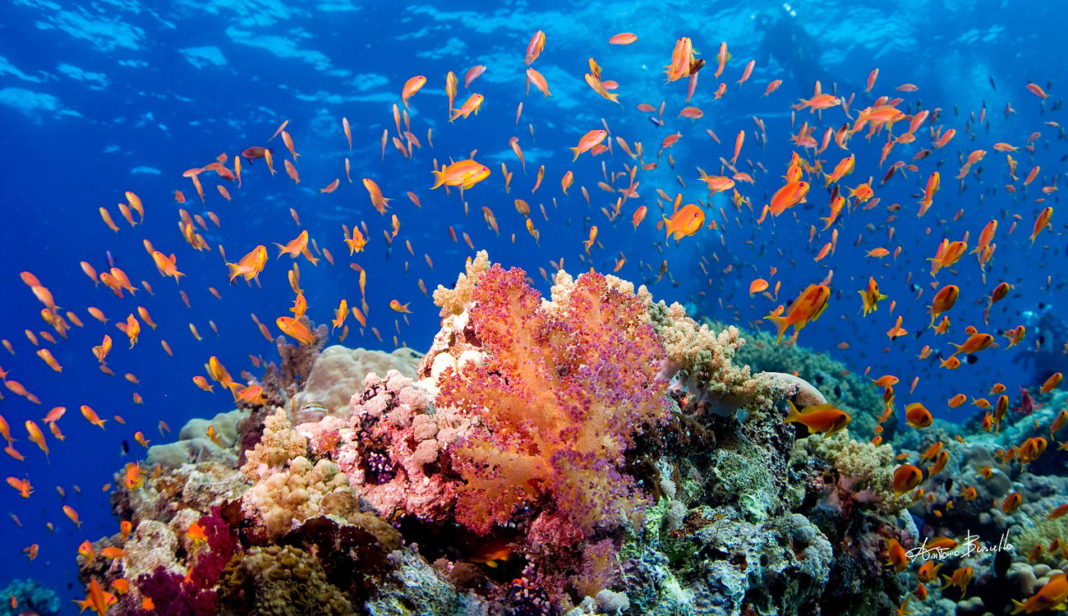 In response to these events, Exposure Labs, the organization that brought us the documentary Chasing Ice, launched a worldwide project to monitor coral bleaching using photography. Their ultimate goal is to create a new documentary raising awareness of threats to coral reefs. As a marine biologist and an underwater photography enthusiast, I volunteered last summer to help with this initiative by taking pictures of reefs in Hurghada, Egypt, and watching for signs of bleaching. I can happily report that, to the best of my knowledge, Hurghada reefs were oblivious to the ongoing global crisis. Similarly, there have been no reports of mass coral bleaching from northern Saudi Arabia, Eilat, Sinai, or Sudan. In fact, diving instructors who have worked in Hurghada for decades claim to never witnessing mass coral bleaching due to thermal stress!

So, in the middle of the surrounding gloom and drab, the Red Sea mostly stands strong and colorful! Except for parts of the central and southern Saudi Arabian coast, which have experienced mild to severe bleaching, the Red Sea did not experience any significant bleaching in 2015 or 2016. The same was true in the previous global bleaching event of 2010. Why is that?

The Red Sea is a naturally hot and partially isolated sea. Relative to the typical conditions in which most coral reefs thrive, water temperatures and salinity levels in the Red Sea are somewhat higher. Therefore, scientists think that Red Sea corals and the algae that live within them are better-adapted to high temperatures than corals in many other parts of the world, to the extent that some scientists study them as models for climate change adaptation! This apparent adaptation is thought to be the main reason why Red Sea corals are so resistant to bleaching.

Sudanese reefs in particular are currently in a fortunate position. Low pressure from human activities such as fishing and tourism means that Sudanese reefs are more-or-less de factoprotected. Reefs in Sudan do in fact boast a much higher abundance of fish, especially of sharks and other important top predators, than their Saudi neighbors. Unlike Egypt with its heavy tourism development, Sudan still has the opportunity to put in place an unencumbered science-based management plan to maintain the healthy state of its reefs before the encroachment of coastal development or the growth of diving tourism. All it would take is some political will.

While this is hopeful news for Red Sea tourism and fisheries, it would be a mistake to think that the Red Sea is immune to coral bleaching and climate change. As mentioned earlier, parts of the Saudi Arabian Red Sea have already bleached twice in the past six years, and, if ocean warming continues, the risk will probably rise. And while they might have a high initial resistance to bleaching, Red Sea reefs are by no means guaranteed to recover easily if bleaching does occur (some affected Saudi reefs have yet to show any signs of recovery since 2010). The ability of reefs to recover from disturbances is dependent on various complex factors. Anthropogenic stressors such as excessive fishing, pollution, sedimentation from coastal development, and careless diving behavior are all factors that increase the vulnerability of reefs and compromise their inherent ability to bounce back from major disturbances. It is also important to remember that different parts of the Red Sea are connected via ocean currents and other processes that are still poorly understood by science. Natural processes do not abide by political borders, and so, local protection in one Red Sea country does not ensure that harmful effects cannot be carried over from another unprotected location. And so, regional collaboration is key.

Stopping the effects of climate change requires a collective global effort to reduce fossil fuel emissions, but this does not mean that there is nothing to be done locally to protect our precious Red Sea. Protecting this irreplaceable ecosystem from destructive human activities will ensure that Red Sea reefs at least have the best possible fighting chance against climate change and continue to be around for generations to come. So, go ahead and support local policies on sustainability and environmental protection. Get that SCUBA license, take that snorkeling trip, check out those beautiful reefs in your backyard, and make sure to spread that ocean love!

If you are a diver in Sudan and would like to help out with Exposure Labs’ reef project, make sure you visit their website at to find out how you can participate!

Maha received her PhD in Marine Science from the King Abdullah University of Science and Technology in Saudi Arabia in 2015. She specializes in coral reef ecology and conservation. She currently teaches a course on climate change at the American University in Cairo. She is also an avid reader with interests in many other disciplines in the sciences and humanities.