Published with permission from the Energy_93 Blog.

It is of no doubt that the world around us is changing, and this change gives rise to new challenges. The most notable challenges facing humans in this era are: the consumption of fossil-fuels energy and emissions of Greenhouse gases (GHG), their deleterious effect on the environment and the impact of Climate Change on the ecosystem. This is more prevalent in developed countries, but  by no means less of a challenge in developing countries. For example, my home country Sudan, which is blessed with an abundance of alternative energy resources (solar, wind and biomass) and diverse ecosystems is sadly slowly, if at all, progressing towards a more developed and sustainable future. This, however, does not mean that it is devoid of hope. There exists a glimmer of light, symbolizing hope which will surely propel it out of this stagnation.

When I watched the CNN news Last December, with the title “Climate Change could Render Sudan Inhabitable” [1], it was not a surprise for me. Sudan, being one of the least developed countries is extremely vulnerable to climate change. This predominately results from climatic and non-climatic factors, in addition to civil wars and conflicts, weak infrastructure and limited access to markets which have aggravated the negative impacts of climate change and therefore, weakened people’s ability of adaptation to climate change.

Non-climatic factors that contribute to vulnerability of communities in different parts of Sudan include unsustainable management of natural resources and socio-economic factors such as: poverty, lack of income diversity, unequal distribution of income and population growth. 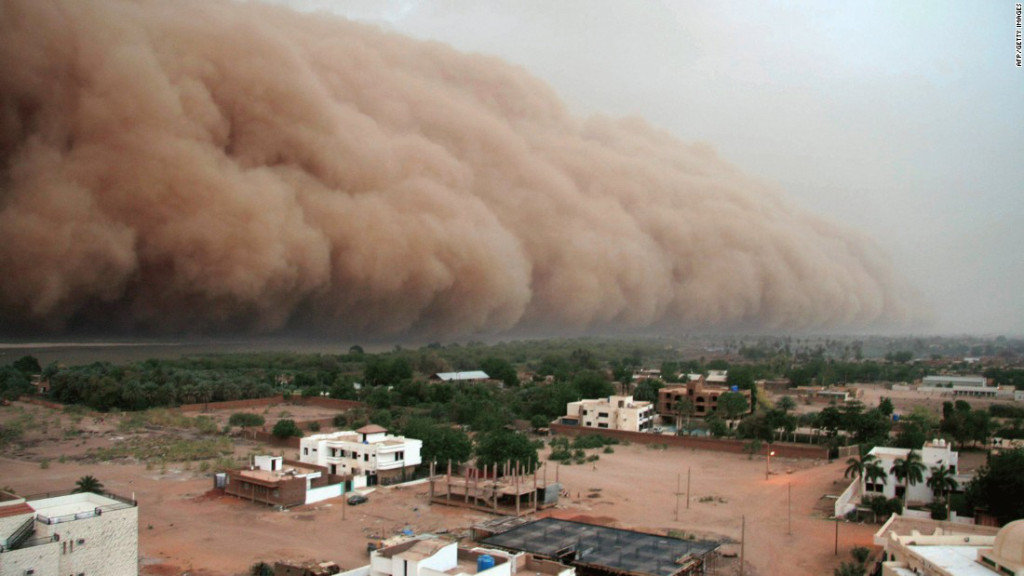 During the last two decades, rainfall in the whole country has significantly decreased compared to 1971 – 2000 rates, this decrease in rainfall resulted in droughts threatening about 19 million hectares of rain-fed mechanized and traditional farms. These droughts resulted in many negative social and economic effects, such as: internal migration and feed-stock fatalities. The average annual temperature in Sudan lies between 26° to 32° and in some places, it reaches 47° which causes a lot of heat-related diseases. [2]

Currently, more than 70% of the population is living in rural areas [3] , and depends mainly on natural resources that are extremely sensitive to climate change. Food security which is mainly determined by rainfall rates in these areas, has become variable and increasingly unpredictable

Regarding the Sudanese energy profile, Biomass presently provides up to 61% of Sudan’s Energy requirements. This is mostly as a source of heat energy, but also increasingly providing a growing production of electricity and transport biofuels. It’s clear that there is a scope to increase the production of all three forms of energy (heat energy, electricity, and transport fuels) from various types of sustainable-sourced forms of biomass that are economically available in Sudan. However, while biomass (as wood and charcoal) is used to provide energy for cooking and industrial heat,  it is still largely used in less efficient ways to convert into utilized energy, thus,  negatively contributing in the deforestation and degradation of natural resources [4]. 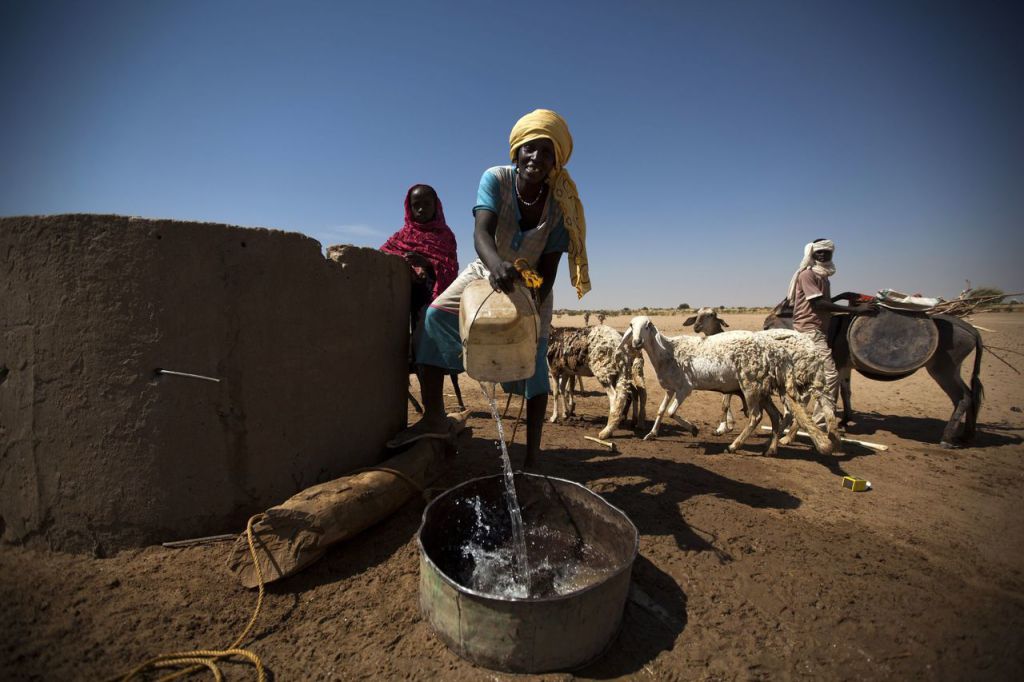 At the same time, Sudan is facing a sudden change in the outlook for its transport fuels sector following the secession of Southern Sudan in 2011, along with the most of productive oil fields. The challenges of maintaining adequate supplies and availability of diesel and cooking gas (LPG) in rural areas are increasing in this context, as Sudan’s potential for alternative supply development of transport fuel and cooking fuel for rural areas, needs to be reviewed. The potential for use of appropriate technologies needs to be assessed and thoroughly researched before any process is funded to go into commercial production [4].

Regarding the electricity sector, electrification rate is only about 30% of the population, as the Sudanese national grid covers only a small portion of the country due to the geographic nature of Sudan. Most regions that are not covered by the grid, rely mainly on isolated energy substitutes such as Kerosene and traditional forms of biomass such as wood, which contributes to agricultural degradation and deforestation of Sudan. Electricity only accounts for 2% of the total energy use in the country.  During the past six years, the number of customers doubled with an annual average increase of 12% indicating an advance in electrification. There are technical and economic restrictions to extend the national grid to rural areas. Therefore, off grid rural electrification has to be considered [3].

Electricity generation is provided by a mix of hydro-power and Thermal generation using refined oil products. Thermal Power generation is mainly operated by diesel generators which implies high electricity costs due to high fuel expenses. It also contributes to local and global environmental pollution by greenhouse gas emissions. Furthermore, the dependency on expensive fossil fuels is a major barrier for a sustainable development of rural areas: high costs lead to insufficient energy supply which in turn impedes economic development.

GHG emissions associated with this energy use trajectory are expected to reach just over 24 million tons of CO-equivalent by 2030, a 6-fold increase from the year 2000 levels (see Figure 3). Transportation and electricity together account for most of the growth in GHG emissions in Sudan, with these two sectors responsible for around 70% of the projected GHG emissions by 2030 [5]. 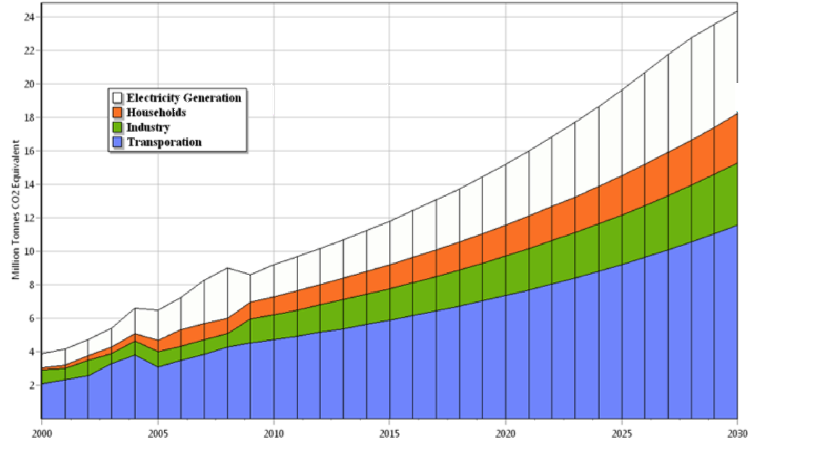 A key component of adaptation is implementation of  Clean Energy technologies, which can help communities adapt to climate change, improve productivity, and help in the more efficient use of threatened resources such as water.Despite the fact that Sudan is classified as a least developed country, Sudan is  ambitiously combating climate change, and pursues the strategic planning process to reduce GHG emissions, or rather pursue Clean Development Mechanism (CDM). Sudan intends to pursue implementing low carbon development interventions in three sectors: energy, forestry and waste, in line with the country’s national development priorities.

Sudan’s national intended mitigation contribution towards the 2015 Paris Agreement is ambitious (given current national circumstances). In the Energy sector, Sudan has various programs of action in attaining  clean energy revolution, such as integration of renewable energy in the power system by utilizing all different resources (20% target by 2030). Particularly, Solar PV energy and Concentrated Solar Plant technology (CSP) are the main renewable sources contributors, with a target of more than 1000 MW in off-grid regions by 2030. Biomass energy will play a key role in this transmission, with a capacity of 100 MW. Moreover, if explored, geothermal and waste-to-energy technologies have a capacity of generating up to 400 MW [2].

On a smaller scale, renewable energy projects have a successful application record in Sudan. For instance solar pumping irrigation systems have been used in off-grid Northern States, with the idea to replace the diesel-generators which were used in the agricultural schemes. This project was executed by the UNDP, Sudan office, with a life-span of 25 years and more than 1422 solar-pump units which began implementation since 2015. There are also bio-gas Cook-stoves projects to replace the less-efficient ordinary three-stones stoves (which have severe negative impact on human’s heath and the environment) in the western states of Sudan. The locally-available animal waste was selected as a feed stock for the household bio-gas units [6] [7]. 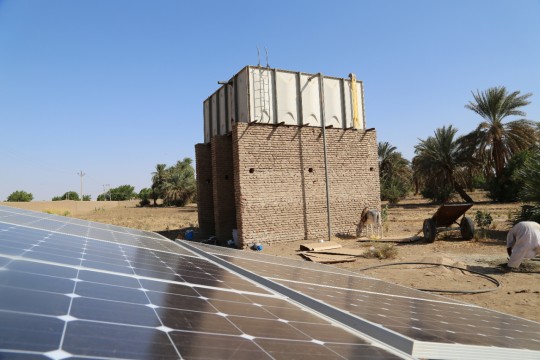 The application of energy efficiency measures are at the heart of the clean energy revolution. The indicative target of energy efficiency reflecting the rate or value of savings in electrical energy consumed in 2016 up to 2030 resulted from measures to improve electric power efficiency and rationalization of electricity consumption. These contributions are estimated to result in energy saving in the order of 6500 GW [2].

As an engineer, I initially had the idea that technology can totally solve the energy issue. However, now I am assured  that the energy challenge is a multidisciplinary systemic multidimensional challenge, and hence,  it has be addressed systemically with a holistic approach. Technology is just one pedal in the wheel; it’s also about sustainability, supply chain, value chain, business models, social appropriation, regulations and human capital. These are all game changers for the scenarios of the future of energy. 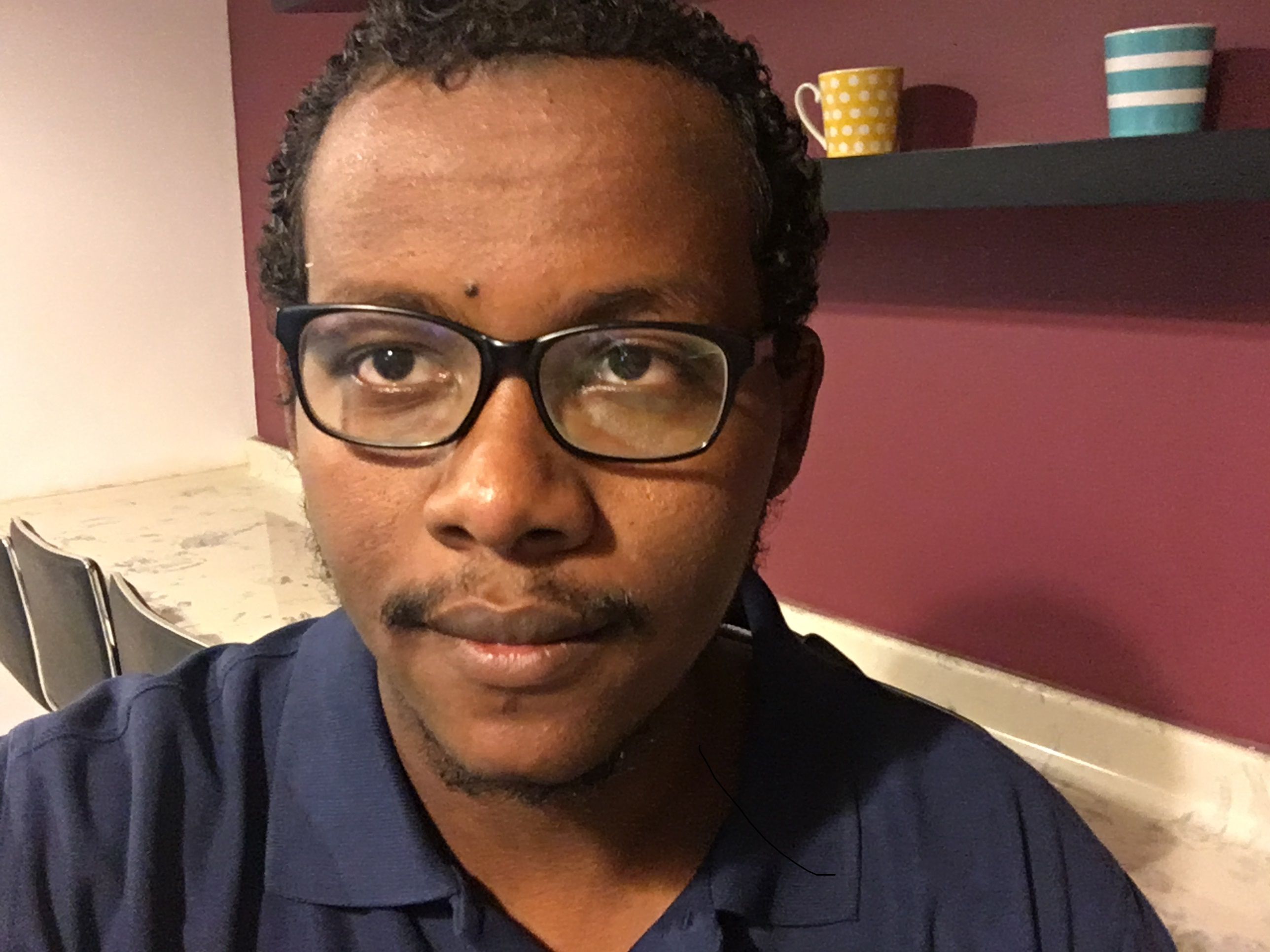 Elgenied Elsiddig is a Chemical Engineering graduate from the University of Khartoum (2015). He worked as a teaching assistant at the University of Khartoum for one year. Afterwards he worked on a Carbon foot-print Research Project as a Research Engineer at Haggar Co. Ltd., in the Sustainability and Social Impact department. He is interested in Sustainable Energy and off-grid electrification challenges in Sudan. He is the author of the Energy_93 blog, which covers climate change and energy supply issues in Sudan.